41 Star Wars Facts That Will Leave You Amazed: May The Fourth Be With You

The release of George Lucas’ space opera, Star Wars: Episode IV — A New Hope, in 1977 marked the beginning of a popular culture phenomenon whose legacy is unparalleled. Along with Jaws, it became the pioneer of the summer blockbuster film in the entertainment industry and spawned an empire (pun unintended) that thrives on merchandise. It launched the careers of Harrison Ford, Mark Hamill, and the late Carrie Fisher, rescued 20th Century Fox from near-bankruptcy, and was a cultural unifier for a generation that was not overloaded with multiple franchises and the resulting FOMO. To mark 41 years since the release of A New Hope, DSSC presents 41 facts about the series you probably didn’t know. May the Fourth be with you.

1. Every Star Wars movie in the original and prequel trilogy has released the week after George Lucas’ birthday on May 14, with a gap of three years within each trilogy. The sequel trilogy and the anthology films broke with tradition in 2015 by releasing in December, two years apart. The latest standalone feature, Solo: A Star Wars Story, however, will be the first since 2005 to align with the original custom.

2. Yoda was originally named Buffy. In later drafts, Lucas envisioned him as a kind of frog, named Minch Yoda. He was later supposed to be played by a monkey or a small child.

3. George Lucas came up with the name R2-D2 during post-production of American Graffiti (1973). One of the sound crew wanted Lucas to retrieve Reel #2 of the Second Dialogue track. In post-production parlance, this came out as “Could you get R2-D2 for me?” Lucas liked the sound of that and noted it down for future use.

4. Peter Mayhew, who played Chewbacca, worked as an attendant in a Yorkshire hospital prior to being cast in the movie. He won his role ten seconds after meeting George Lucas for the first time; all the 7’2″ Mayhew had to do was stand up.

5. In 1978, David Prowse, better known as Darth Vader’s body, spilled the beans on Luke’s parentage to a local newspaper, two years before Empire Strikes Back hit the theatres. The script called for Vader to tell Luke that Obi-Wan killed his father in order to keep the truth a secret even from the actors. It was only after the dubbing session when James Earl Jones voiced the now famous, “I’m your father, Luke” that the world got to know. While it is believed that Prowse was merely fooling around with the local journalists, it is amusing to know that he guessed it right.

6. David Prowse did not film any of the lightsaber battle sequences for Return of the Jedi. He was replaced by a much shorter stuntman, Bob Anderson, who wore platform boots.

8. Lucas did not have high expectations from the first Star Wars film as its production kept hitting one roadblock after another. He went to meet his friend Steven Spielberg on sets of the latter’s film Close Encounters of the Third Kind and felt all the more disheartened about his own venture. He asked Spielberg for a 2 percent share in the profits of his film, but Spielberg struck a bargain and made a bet with Lucas for a 2.5 percent share of the Star Wars films. Whilst Close Encounters went on to become a blockbuster hit and helped Lucas financially, Spielberg’s investment has earned him millions of dollars since.

9. Many of the buildings constructed to be used in shots of Tatooine are still standing in Tunisia and are even used by locals.

10. Mark Hamill held his breath for so long during the trash compactor scene in Episode IV — A New Hope that he broke a blood vessel in his face. Subsequent shots are from one side only. 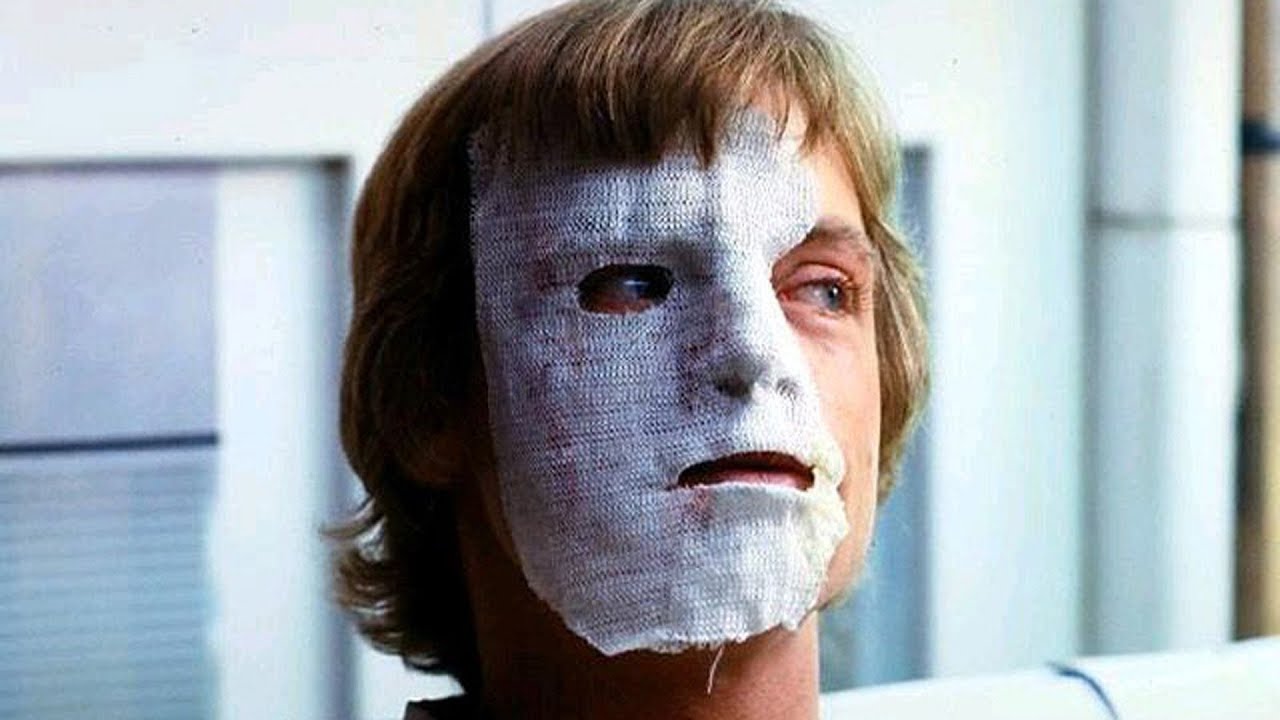 11. Mark Hamill was in a bad car accident in 1977 before filming started on Star Wars: Episode V — The Empire Strikes Back, causing severe facial trauma. The scene in which Luke Skywalker is mauled by a Wampa was added to account for the scarring on his face.

12. While filming Star Wars: Episode VI — Return of the Jedi, the codename for the project was Blue Harvest, which was supposed to be a horror film with the tagline “horror beyond imagination”. The cast actually seriously considered making Blue Harvest when a series of sandstorms halted filming for several days. The name “Blue Harvest” was a reference to Dashiell Hammett’s novel, Red Harvest, on which Akira Kurosawa’s samurai masterpiece Yojimbo is based, which in turn is said to have inspired Star Wars.

13. In what is either amazing planning or complete coincidence, the one word C-3PO says to the Ewoks in Return of the Jedi is “Naboo”, which was later revealed in The Phantom Menace to be the homeworld of Luke and Leia’s mother — and Anakin Skywalker’s wife — Queen Amidala.

14. Lucas pitched a very dark ending for Return of the Jedi where Luke puts on Darth Vader’s mask and helmet and declares, “Now I am Vader.” The idea was discarded because the franchise was meant for kids and would have resulted in a loss of revenue from the merchandise.

15. Vader wasn’t Luke’s father at first. In Leigh Brackett’s first script draft, Luke meets his real dad, who says he sent away Luke and his secret sister for their own safety (Luke’s sister has been training to be a Jedi knight in secret, just as Luke has) and goes on to administer the oath of a Jedi Knight to Luke, who swears to “dedicate my life to the cause of freedom and justice”.

16. The Empire Strikes Back was to have a love triangle which would have served as the cause of Luke’s humiliations and lack of courage.

17. The initial draft of The Empire Strikes Back did not have Han Solo getting frozen in carbonite in the end. Instead, he and Chewie leave on the Millenium Falcon on business.

18. In the original trilogy, The Empire Strikes Back makes the maximum use of stop-motion animation.

19. Steven Spielberg, David Cronenberg, and David Lynch were approached to direct Return of the Jedi, before Richard Marquand was brought on board.

20. The word “Ewok” is never actually uttered in Return of the Jedi. It appears, however, alongwith the names of individual Ewoks in the end credits. The name “Ewok” is derived the Native American tribe, “Miwok”, indigenous to the Northern California redwood forests, where the Endor scenes were filmed.

21. Lucas originally did not intend for Yoda to be a part of Return of the Jedi, but had to include him after consultation with child psychologists convinced him that an older, wiser, and an independent character like him was needed to confirm the veracity of Darth Vader’s claim that he was indeed Luke’s father.

22. Different theories are cited for the change in the title of Episode VI. Lawrence Kasdan, the co-screenwriter, suggested that the film be titled Revenge of the Jedi instead of Return of the Jedi as he considered the latter “too weak”. However, “ Revenge of the Jedi” clashed with the second Star Trek movie, The Vengeance of Khan, which was later changed to The Wrath of Khan. Another theory suggests that “Revenge” did not align with the kid-friendly sensibilities of the film. Yet another argument (and quite clever at that) is that Lucas announced Revenge simply to discourage the sale of counterfeit merchandise.

23. Princess Leia is the only named female character in the first two Star Wars movies. Return of the Jedi holds the dubious distinction of being the first in the series to have another woman who is not a background extra, Mon Motha.

24. Both Harrison Ford and Lawrence Kasdan wanted Han Solo to not survive the thawing in Return of the Jedi to make the audience believe that no-one was safe in the film, but Lucas opposed it favour of a happy ending to ensure — you guessed it — lucrative sales from merchandise.

25. Two abandoned ideas for the first draft of the script included bringing Obi-Wan Kenobi back from the dead, and ending the film with Leia and Han’s wedding, in a ceremony similar to the one in A New Hope where Luke, Han, and Chewie win medals.

27. According to Mark Hamill, studio executives were unhappy that Chewbacca has no clothes and attempted to have the costume redesigned with shorts or any below-the-waist clothing item, despite the fact that he is covered in fur, much like an animal. 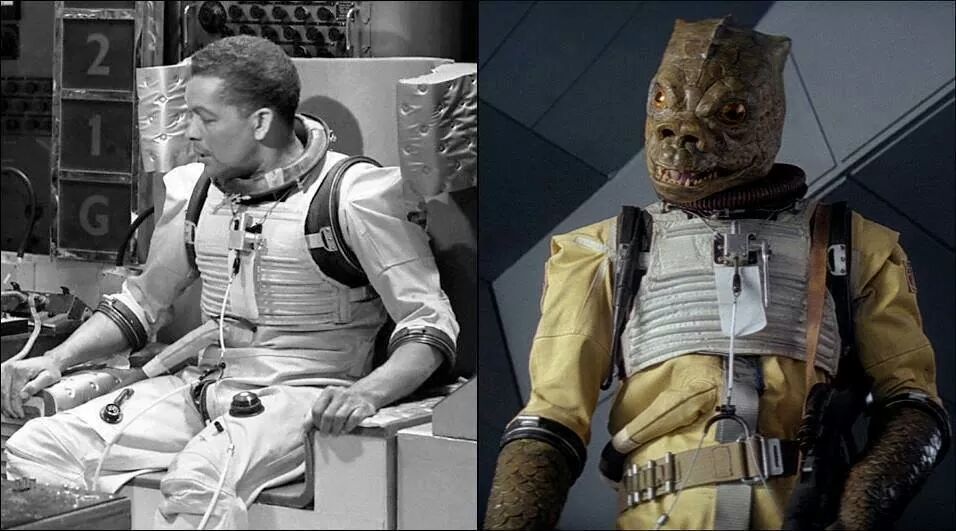 28. The bounty hunter Bossk’s clothing is a recycled spacesuit from Doctor Who, but that’s not all. This suit is actually an unaltered High-Altitude Windak Pressure Suit made for the British Royal Air Force. Bossk wears the same one in A New Hope in the Cantina. While it is unlikely that this is the same suit as in the Doctor Who episode, it is still a really cool common ground between two amazing franchises.

29. The C-3PO outfit worn by Anthony Daniels in A New Hope was far from perfect due to budget constraints, and kept falling apart while filming in the desert heat of Tunisia. After the left leg of the costume shattered and forced itself into Daniels’ foot, he and Lucas decided to shoot scenes — wherever possible — with only the top half of Daniels’ body visible as he removed the bottom half of the costume.

30. Another actor who filmed mostly his top half or stood behind furniture is Peter Cushing, who played the role of Grand Moff Tarkin in A New Hope, because the boots provided to him with his costume were too tight for his feet. After discussing the problem with Lucas, Cushing was permitted to wear slippers with the rest of his Imperial uniform.

31. In Episode II — Attack of the Clones the waterfalls cascading down the capital city of Naboo were simulated using salt.

32. Members of the American band NSync made an appearance in Attack of the Clones because Lucas’ daughters were fans, but their scenes were removed from the final cut of the film. (Did someone say “Bye bye bye”?)

33. E.T.’s alien species, Grebleips (“Spielberg” spelled backwards), are part of the Star Wars universe, making an appearance in The Phantom Menace as members of the Galactic Senate. 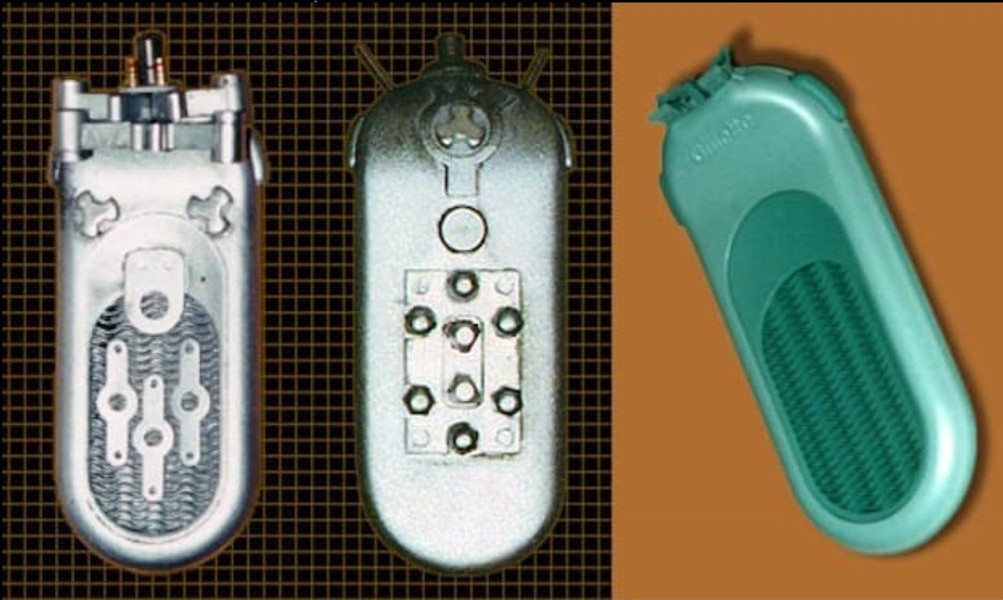 34. The communicator that was used by Jedi Master Qui-Gon Jinn in the prequel trilogy was actually an altered version of Gillette Sensor Excel women’s razor.

35. The line “I have a bad feeling about this” is said in every Star Wars movie. In Episode VIII – The Last Jedi (2017), BB-8 says it in binary during the opening sequence involving the evacuation of D’Qar.

38. Each film in the prequel trilogy was shipped to theatres under a pseudonym to avoid theft or damage. The Phantom Menace was labelled “A Doll House”, Attack of the Clones was referred to as “Cue Ball”, and Revenge of the Sith was labelled “The Bridge”.

39. George Lucas’ children — Katie, Amanda, and Jett — appeared as extras in Attack of the Clones.

Anthony Daniels in an out-of-costume appearance in ‘Attack of the Clones’; Image: fangirlblog.com

40. Anthony Daniels, who played C-3PO, appeared out of costume in a scene in Attack of the Clones.

41. A disco version of the Star Wars theme called “Star Wars Theme/Cantina Band” by Meco held the number one spot on Billboard Hot 100 for two weeks in October 1977.

Solo: A Star Wars Story will premiere on May 15, 2018 at the Cannes Film Festival before releasing worldwide on May 25.

4 Cold Brew Recipes To Get You Charged Up This Summer