5 Music Festivals In India You Can’t Miss This December

It’s that time of the year again, no, we’re not talking about Christmas. It’s time to tune in, get grooving, and revel in that electric vibe…you get where we’re going, t’is is the season of music festivals. Whether you’re an upcoming artist, an aficionado, or just looking to ‘shake it off’ a.k.a winding down a hectic year at work, these are the best festivals you need to head to. Bringing you the roster of festivals you can’t miss this December, #DSSCRecommends you book your tickets pronto to enter the realm of music uninhibited.

The gem shining brightest in Nagaland’s crown, Hornbill Festival celebrates the rich and vibrant Naga culture with a mélange of displays and performances. Named after the venerated bird, and often regarded as the ‘festival of festivals’, this ten-day extravaganza offers an enlightening and captivating experience. Whilst the traditional art and dance forms provide an insight into the tribal way of life, the Hornbill Rock Contest has put this festival on the global map. With 25 bands from across the world participating in the country’s biggest rock battle this December, expect adrenaline and high octane.

Termed the happiest music festival in the country, NH7 Weekender is returning to the city they call home, Pune, this edition. Conceptualised, produced, and organised by Only Much Louder, the event is one of the largest music festivals in India, with an annual attendance of over 100,000 festival campers. Known for their strong lineup of performances by local & international artists and instagram-worthy art installations, NH7 is the place to be if you want access to Indian Ocean, Bombay Bassment, The Ram Sampath Experience, Steve Vai, Rohan Joshi, Kanan Gill, Nooran Sisters, The Ska Vengers….we can go on.

Pushing the envelope on what constitutes jazz, GIJLF creates an enthralling atmosphere with sounds of the saxophone, guitars, and drums bewitching your soul (and feet). An experimental, up-tempo, and funky celebration of new-age jazz, this two-day festival offers an opportunity for mixing punk, hip-hop, R&B, and other forms of music with this classic genre. Known for bringing jazz traditions of innovation to the digital age, globally-acclaimed drummer, Jojo Mayer will be taking the stage. The not-to-be-missed line up doesn’t end there. French trumpeter, Erik Truffaz is collaborating with ambient electronic musician from Mumbai, Riatsu, to bring tunes that are fresh yet simultaneously nostalgic. With Kefaya, Florian Favre Trio, Pol Belardi’s Urban 5, The Latination, and Madfingers taking things up a notch, Goa is headed to become a music enthusiast’s haven. 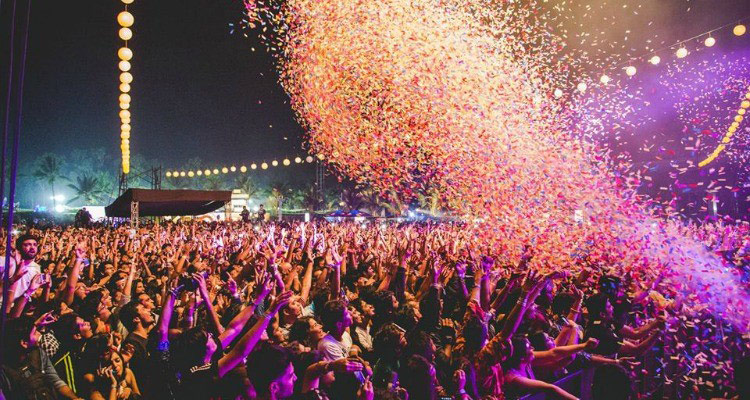 One of the country’s most awaited music festivals, Magnetic Fields is all set to light the stage on fire with its fifth edition this December. Set in the historic and opulent Alsisar Mahal, the festival seamlessly weaves ancient India with contemporary music culture. Offering a stellar line-up of music artists like Four Tet, Machinedrum, Daphni, Ben UFO, Sassy S, Willow, Khruangbin, and Jivraj Singh, Magnetic Fields is an irresistible attraction (get it?). #OurCity’s ace artists, Latination, Sanjeeta Bhattacharya, Kunal Netrapal, Sonic Shori, Rainer Pusch, and DSSC homie, Arjun Sagar Gupta will be championing jazz at the festival with nights curated by The Piano Man gent himself. Promising to transport you through the looking glass into an intimate world of adventures, it’s offerings span well beyond the musical journey. Think laid-back vibes, eclectic fashion, unmatched energy, and gigs all day.

The days between Christmas and New Year boast of the perfect concoction of ‘em festive vibes and euphoric energy, which is exactly why TimeOut 72 is where you need to be. Helmed by young entrepreneurs, Vaishal Shah and Aayush Mehta this new kid on the block is showing great promise. With hip-hop rapper, Wiz Khalifa and multi-platinum artist, Jason Derulo, Australia’s acclaimed DJ Timmy Trumpet making their debut visit to India, this festival is already topping the vacay lists for many. Set to push the boundaries not just with line-up but also production, the stage productions are inspired by the element of time and are assured to transport you to a world of déjà-vu. With hypnotic laser shows to visual mapping, it’s well on the path of becoming the numero uno festival of the country.

Top 5 Indian Film Festivals That You Should Bookmark