Bombay Brasserie, the revered Modern Indian eatery is now open in Delhi with a sprawling outlet in Connaught Place. We ate our way through the small plates, street grills, paired curries, and large plates to bring you a lowdown of what the Bombay Brasserie dining experience has in store.

Appreciating the classic glasshouse style décor, awed by the spaces between tables (a hard find in Delhi), and not too flattered by the Edison bulbs, we dived straight into the Patiala Bar for our share of Desi Cocktails. We opened our account with the subtle and refreshing Calcutta Kick bearing flavours of a saada paan spiked with vodka, which lingered on long after the cocktail was over. The Fauji Party Special was a heady and endearing mix of rum, pineapple, and tangy spices that helped us work up an appetite. Bombay Brasserie brings sassy pauwa bottles from the movies to the bar giving us an Indian way of enjoying our tipples.

A gustatory onslaught was unleashed after the round of cocktails. The entire menu is comprised of produce sourced from all corners of the country. The twists to Indian food are well-thought of and not over the top, the food is sumptuous, the portions are plentiful, with no liquid nitrogen-laced gimmickry involved. For our meal, first up was the 6-Chutney Papad Tokri that adds the quintessential crunch to an Indian meal. We chip and dipped our way through the platter of aloo, urad, and sabudana poppadoms paired with a medley of homemade chutneys. Our table then shifted focus to the just-arrived Kashmiri Naan Kebab. A succulent and aptly spiced mutton seekh was perched atop saffron brushed naan with a side of refreshing doon chetin, a Kashmiri walnut-yoghurt dip. The portion was enough for a single hungry diner to roll up and make a meal of, or to share. The Rajputana Murg Soola Kabab were cooked well and spiced skilfully, but offered little more than the average joe. We reached out for our next appetizer, the Aam Papad Paneer that bore deftly cooked cubes of soft cottage cheese rolled in pureed mango fruit leather with an unusual pairing of crunchy lotus stem tossed in street food spices. Another variation of the paneer appetizer, the dry spice rubbed Anardana Mirch Paneer was a revelation to the taste buds, exemplifying how a great dish can be crafted from a handful of ingredients and the right cooking techniques. The mini Tilkut Masala Flat Rotis came topped with spiced eggplant and tangy tomato peanut chutney zinged up with tilkut masala from Sangli (Maharashtra), koshambir, and a sprinkle of sesame seeds. This one got a round of applause at the table as this dish successfully ended our quest for the perfect Indian taco.

The rose-based Jaipur Gulabo cocktail helped us cleanse our palate as we reached out for the baby Gunpowder Potatoes tossed in a fiery molaga podi from Tamil Nadu. The spuds fit the bill for an all-day monsoon snack, striking off the hot, spicy, and comfort food checkboxes all in a go. It ain’t easy to hold yourself from popping these one after the other. Warn you, we did. Gracing the table next were the smoked and roasted Naga Ghost Pepper Wings that aren’t for the faint-hearted. The slightly delayed kick from the bhoot jolokia peppers hits the palate upon biting into the crisp on the outside, soft and juicy inside chicken wings, setting the mouth afire. We enjoyed them with tears rolling down our cheeks, but kept at it till we polished off the last dregs. Providing a balmy relief were the moreish Subz Seekh Kabab — tender, easy on the spices, and bursting with flavour. The famed street shop special kootu roti from South India made it to our table disguised as the Tamil Street Chicken. We experienced love at first bite upon tasting the shredded roti sitting in perfect harmony with the chilli and coconut tempered chicken.

Feature presentation over, it was time for mains and we kick-started with Mario’s Mango Prawns & Coconut Rice. The dish owes its robust flavour to the traditional Goan Ambotik Masala; the spicy and tangy gravy gets offset by the sweet notes of ripe mango, and the coconut rice make an incredible pairing. Appearing triumphant on the taste-o-meter, the tawa tossed Paneer Sirka Pyaz sat in gravy that got a punch from vinegar soaked pearl onions, and we swiftly mopped it down with hot and fresh tandoori rotis. Up next for the non-vegetarian mains was the Bombay Dabba Ghost, the Bombay Bohri style mutton masala, topped with a fried egg that we savoured with a flaky and buttery chur chur naan. Though flying high on flavours the meat was a tad dry to our dismay. And while purists debated the differences between pulao and biryani, we snuck out to dig into a sumptuous vegetable Achari Biryani — seasonal vegetables, little chunks of paneer, bites of achar, cooked along with rice in dum made up this fragrant biryani finished with saffron, and topped with caramelized onions, all sitting patiently under the purdah. We ended our meal with the Ismaili Kofta Biryani, an Indian twist on scotch eggs along with sour cherry kheema rice. 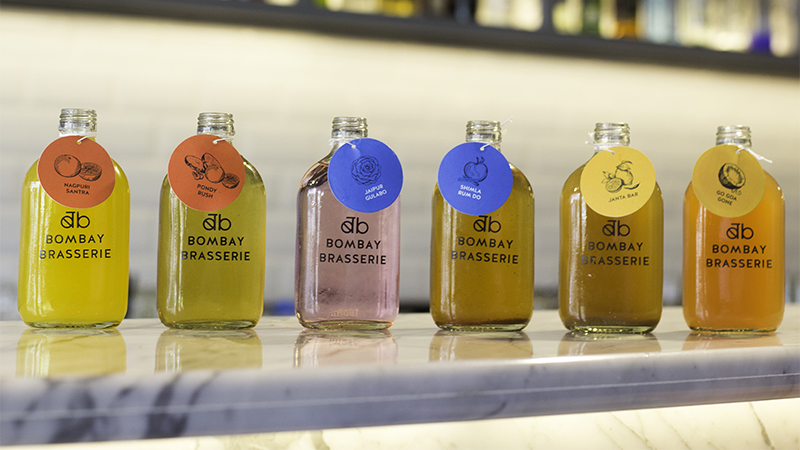 We wrapped up the supper with three back to back desserts appearing on the table. The first, Ras-e-Aam had a rasgulla sitting amid a thick pool of rabdi and drizzled with aamras prepared with alphonso mangoes. An innovative dessert, the Ras-e-aam bagged mixed reactions from the table; some did not appreciate the dry rasgulla. The not-overtly sweet Bitter Chocolate & Jaggery Skillet cookie with a scoop of vanilla ice-cream is for those who like the combination of warm chocolate and ice-cream; the use of jaggery lends this dessert an earthy and appealing flavour. The warm and comforting Anglo Indian Bread Pudding hinted of vanilla, and came with house special custard. The simple presentation had us reminiscing winter evenings at home and of granny’s love.

As we wrap up keying in this review from the DSSC Headquarters we’re already plotting an escapade to dig into their High Chai menu.