Kriti Film Club: “We Are A Development Support Group, Not A Project”

At a time when a majority of cultural content is generated keeping a directed lens towards entertainment and financial profit, Delhi based Kriti Film Club forgoes it all to ensure social development. The brainchild of 19-year old Kriti Team, a Non-Profit Organisation, the Film Club focuses on documentary cinema and social films to fuel the discussion around some of the most pressing concerns of our time, from casteism to climate change. We talk to Aanchal Kapur (Founder) about what goes into running a non-profit film club.

Kapur, who has been working in the development sector for nearly 26 years, started Kriti Team in 1999 to work with grassroot NGOs, social movements, and students, with the goal of sharing knowledge, skills, and action resources. Kriti Team came into existence as a development support group and not, as Kapur emphasises, a consultancy. “There’s a difference, because there are people who believe in the development processes and that we need to work on these issues beyond just making money out of it. We decided very consciously that we will offer certain resources and activities that can be done independently.” 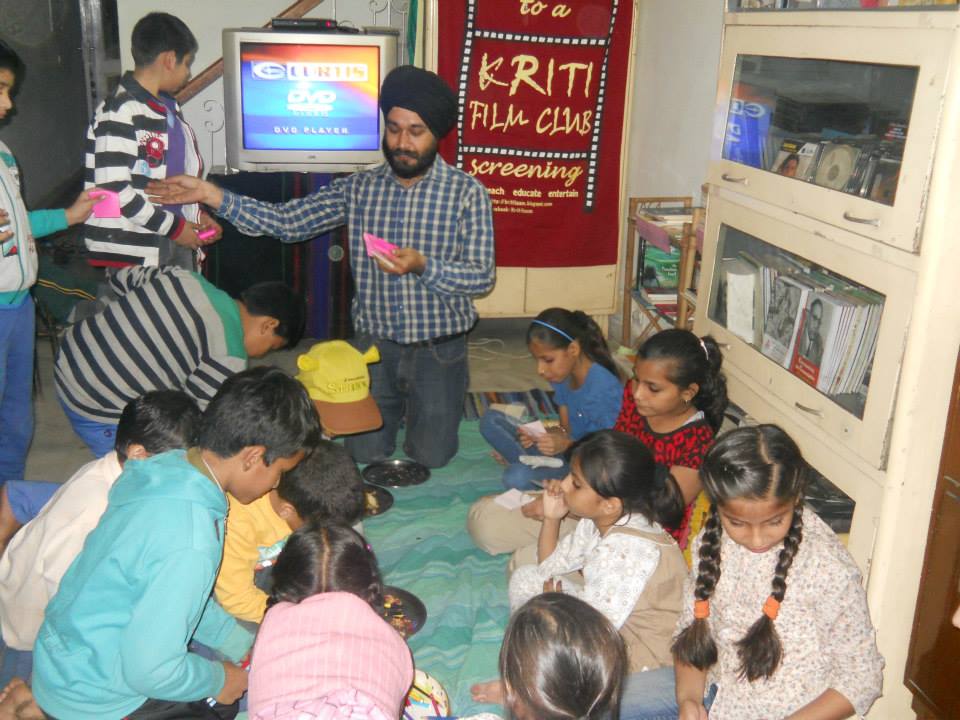 Celebrating Children’s Day with a film screening at Tara Apartments

In the late 90s, whilst documentary films were being made, they were not being seen and shown outside of film festivals. Kapur used films in her training work on social issues, and felt that the value of documentaries was not recognised enough. Therefore, Kriti Film Club hunts out and screens documentaries, and has built a library and archive of those resources. Its intervention goes beyond showcasing a film, by creating a body of knowledge and action, perspective, and thought process that would impact people, and hopefully encourage community work because social change cannot happen with a few people working in isolation. It also serves as a neighbourhood film club or an informal screening space outside of the realm of film festivals, which is open to all kinds of audiences, irrespective of their age and occupation.

Talking about the lack of accessibility, she says, “Adoor Gopalakrishnan ran underground film societies in the 60s, which means that there were films to show even then. But where did they all go?” Kriti has been constantly striving for increased access to films, however, achieving that calls for the impossible task of screening 365 days a year. Yet, the Team has consistently screened at least one film per month since 2000. They haven’t, however, funded themselves as a project, despite several opportunities to expand. Kapur attributes this to a lack of interest in pushing themselves as a brand since they are primarily concerned with sharing resources. In an age where people promote their brand even before they have begun, Kapur hopes for this anomaly to help them stand apart.

From showing films on a TV set at Tara Apartments in Alaknanda (New Delhi), Kriti Film Club has come a long way, as can be evidenced in their monthly collaborations with India Habitat Centre. But the intimacy and power of the former, Kapur says, is yet to be surpassed. “We have had as many as 80 people jostling for space, standing in the corridors to watch our films, and we have never stopped even if only two people turned up, because for us the consistency of our work is of utmost importance.” Kapur talks about the trickle down effect of the screenings into post-film discussions and, thereafter, life. After a screening on cows eating plastic, an audience member reached out to the filmmakers, and together they produce and distribute cloth bags to vendors to reduce plastic waste. The reason for such sincere responses, Kapur believes, is that they have “never tried to force an agenda down people’s throats; we are not running the film club as a project. The day we start doing that, we will probably lose whatever we have achieved.”

Kriti Film Club’s strength lies in their passion to bring about a social change without worrying about the monetary yield. Kapur finds it interesting that one thinks of sustainability only in terms of money. As far as sustaining goes, the film club has had an immensely eventful journey — from screening to building a library to getting requests for access to archives, and then starting film distribution in the capacity of a support group — without capitalising on any of it. However, Kapur is grateful for the support of its volunteers, and the filmmakers who request them to screen their films. Kriti facilitates discussions which depart from a filmmaker’s perspective. While they are aware of the technicalities of filmmaking, Kriti’s experience on the field (through their work with NGOs) enables them to see themselves as both audience and projectors, thereby detaching them from the process of making a film.

Discussing their plans for the future, Kapur believes that they are in no hurry to make Kriti Film Club into an institution because there is a lot more potential than they have tapped till date. The dedication of its volunteers, and the faith with which filmmakers request for collaborative screenings keeps them buoyant. “The very fact that somebody asks us for our support is how we sustain ourselves. One can’t put in years of effort into something and then suddenly give up because it’s not financially profitable. In a nutshell, we sustain ourselves by being mad. And I don’t mean ‘mad’ in a sarcastic way.” With almost 20 years behind them, here’s to hoping for continued “madness” from Kriti Film Club for years to come.

Ranthambore Festival 2018: The Keeper Of Traditional Music, Culture, and Nature