The word ‘Manmarziyaan’ means one’s own will and wish, and the driving force of the plot is exactly that – the protagonists’ fickle hearts and desires. The movie is a beautifully confusing love triangle written by Kanika Dhillon and directed by Anurag Kashyap. Surprisingly, it’s a total departure from Kashyap’s usual cinematic style. His signature violence and moodiness does not make an appearance here, but his sensibilities, keenness and rationale is felt throughout the two hours and eleven minutes of the film. Panning through the old-world bylanes of Amritsar, this movie explores the changing norms of love, and arranged marriage in a changing world – a world of choice and dating apps like Tinder. It tackles highly complex emotions like love, lust, and vulnerability in possibly the most real manner that Bollywood has managed to do till date.

The movie begins with Rumi (Taapsee Pannu), an ex-hockey player and general spitfire, and her wannabe DJ lover Vicky (Vicky Kaushal) who met on Tinder, and then made each other delete the app off of their phones. The couple are in lust, love and everything in between, but when they’re caught sneaking around by Rumi’s family she’s given an ultimatum – to settle down with a husband of their choice. She compromises with them to let her marry Vicky, whom she is convinced will turn up with his family to ask for her hand. If he doesn’t, she’ll marry anyone of their choice. While the family starts making rounds of marriage bureaus in the area, Rumi has to face Vicky’s commitment phobia. After standing her and her family up multiple times and even an attempted elopement, Rumi chooses to get arranged into marriage with Robbie (Abhishek Bachchan) who is a London-return banker, typical. 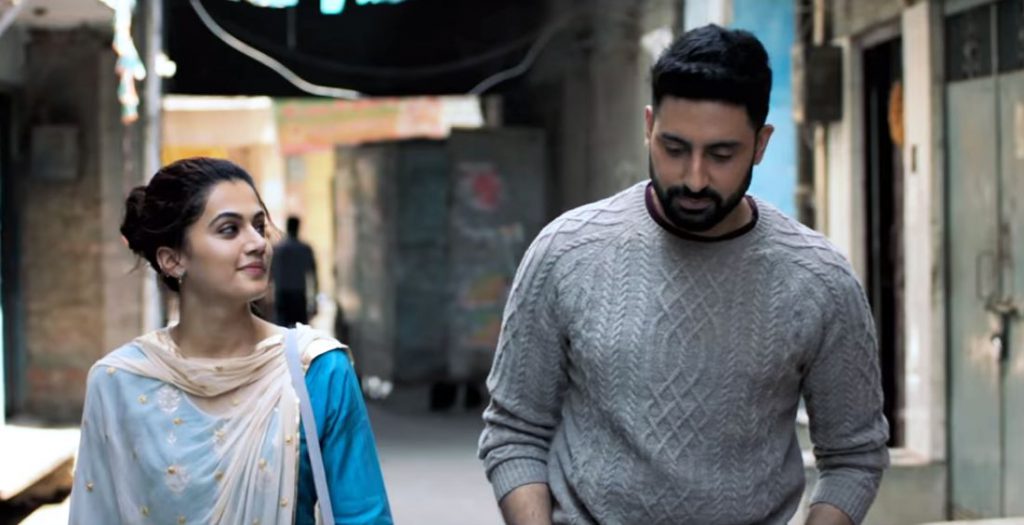 Despite her heartbreak, Rumi and Robbie have their tender moments, with the couple downing multiple whiskeys on their first night back from the honeymoon and screaming across rooftops while Robbie’s father reassures his wife “Bacche comfortable ho rahe hain”. But Vicky does not stay out of the picture for very long. He returns, leading Rumi down a path of confusion and infidelity, portrayed to a fault by leading lady Taapsee. Robbie, nicer than the usual nice guy offers her her space, and a choice to stay within the marriage or leave to be with Vicky. Rumi argues back “I want to stay in this marriage. Why are we discussing this?” to which Robbie responds “Because discussion is a good thing.” The movie has plenty of emotionally mature moments such as these sprinkled throughout, yet it never feels overwhelming or phony. The characters’ problems are very real, and acted with such precision that one feels the angst, pain, and confusion while watching the film, unsure of what course the movie will take.

The pace of the movie is determined by the thoughts and decisions made by the characters, not by big events. Yet this psychology is as tangible and effective as real events, if not more, due to the stellar cast. Taapsee Pannu shines blindingly bright as the star of Manmarziyaan, with her intense and realistic portrayal of Rumi. The casting for Vicky’s role could not have been more apt – it is hard to believe that Kaushal is not actually the brash, Honey Singh-inspired Punjabi youth that he plays so well. Abhishek Bachchan’s return to film is with the good guy character he has been known to play often, and as a result is not too remarkable. Sylvester Fonseca brings the movie to life with stunning shots of quintessential Amritsar – The Golden Temple and neighborhoods – and also of the unseen parts of it: streets and rooms decorated with neon graffiti (borrowed from Instagram-famous artist Sam Madhu).

The final scene is definitely one of the most beautiful, eloquent, and well-written scenes ever made in a Bollywood love triangle. Overall, Manmarziyaan is a film that takes age-old Bollywood tropes and treats them in a way that is closer to life, much more relatable and extremely heartwarming. Watch this if you’re looking to watch something different this weekend!