Every once in a while a modest F&B venture sets foot on #OurCity’s culinary landscape and proves to be a firecracker, putting on a splendid show that leaves you mesmerised. One such new kid on the block who already seems like a pro is Mood — launched by the mother-daughter duo of Kusuma and Nicole Juneja, this homemade Northeastern cuisine heaven is the answer to your quest for the momos in the capital. Along with the not-so-little dumplings that put you at risk for food coma are the splendid tingmos, khapse, smoked pork, et al. that are your answer to authentic, lip-smackin’ Northeastern fare in Delhi, that come in mother’s love-sized helpings, because Kusuma’s maxim is “I’d rather they eat too much than not enough”. As we order one too many of their weekly takeaway services, we chat with the two ladies who share incredible chemistry, proving the adage of ‘blood and business don’t mix’ wrong and enthusing the room with their infectious energy.

What led to the genesis of Mood?

Nicole: Growing up, mom’s cooking had always been quite popular in our circles (also explains why I could never stick to a diet!). But while I was busy eating her food, it was my cousin, Vishal, who suggested that she should start selling it.

Kusuma: Time and again he’d say that. In fact, even tossed around the idea of getting a food truck in Sydney (where he’s based) to sell momos! I kept thinking ‘maybe one day’, but wasn’t sure if it was something I could pull off at this age.

Nicole: Ha! She’s the one who keeps me young. Knew we had to get mom’s food in more bellies, but wasn’t sure how. It was few years later, and during frequent trips to Bombay that I came across offbeat food businesses such as Trekurious and Bohri Kitchen, who invite you to their homes or deliver home cooked meals — thanks to Shweta, an adorable friend and fellow foodie. As a young professional living alone and away from home, she loved having these options for a delicious home-cooked meal from time to time. And that’s what got the wheels turning.

I knew we’d call our service ‘Mood’ even before we had fully worked out the concept, because it represents mom so well! Lady has no filter, bless her. 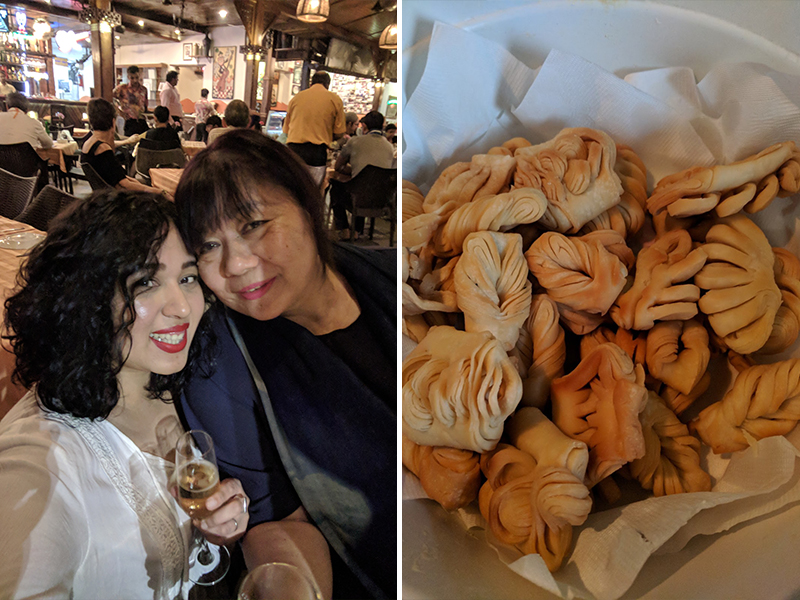 Nicole, what prompted the ace brand strategist in you to venture out into the F&B industry?

For over a decade I’ve been on the service side, working with brands on their PR and marketing campaigns. The journey has been fascinating, from Peepul to MissMalini, but a part of me always wanted to build something of my own. It’s something that my dad encouraged me to do since my early years. At Nicotalk, I knew my consultancy services would be the immediate offering, but as a second vertical, always intended to develop my own brands and produce talent as well. It’s really exciting to take the first few steps in that direction. Time to walk the talk. #NoPressure!

Tell us more about the roots of this cuisine.

After school, most of us ended up settling down in different parts of the world. This influenced home recipes, which have come to represent the food and flavours we’ve loved over the years and stayed loyal to, no matter where we are. For example, my sister Asha in Sikkim taught me how to make Khapse; Padma di in Bhutan gave me the recipe for Ema Datchi; the Aloo ko Achaar recipe came from Nayan di in Nepal; Sushma in Hannover is the one we can thank for the tender Smoked Pork; while my brother Saroj in Kalimpong is my go-to person for dishes like Paah and Kargyong (other seasonal non-vegetarian items which will come up in our meals later this year).

What process does Mood follow for deciding the menu for each service — from ideas to trials to execution?

Nicole: Whatever mom’s in the mood to cook; that is literally how the menu is planned for each service! That said, we do try to offer a little variety in each meal, and avoid the same menu for back-to-back meal services.

Kusuma: Also, can’t wait for the weather to get better. Will be introducing more dishes with the cooler season.

Nicole: As for the rest of our process, the dishes we’ve picked for our meal services are ‘the greatest hits’ that have been cooked up in mom’s kitchen over the years. Momos being her chart topper. This is why every family holiday at my aunts’ will end with mom making a few hundred momos for them (which they freeze, ration, and eat over the next few weeks). She’s also really fast, it’s why we call her the ‘food ATM’. That said, I love the other things she makes just as much, like her Thai Curry Rice or Okonomiyaki. But being very early days for us, we wanted everyone to first try our signature items, and then slowly get to know us better over time. As for our meal size and portions, a lot of the early feedback has been that they are very large (enough for two meals at least!). Dare I say, I did mention this to mom but she wouldn’t have it any other way.

What is your POA to make Mood stand apart from the rest and represent what it stands for?

Kusuma: When it comes to food, two things ring true for most people — when the food is great, you will go the distance; and no one wants to eat the same food everyday. One likes variety. All the more reason for even more restaurants and similar businesses to come up, but the food needs to be great! And consistently so, over time. That’s the only thing I’m going to worry about at Mood.

With the world moving towards a plastic-free era, do you plan to inculcate that into your work model soon too?

Nicole: Absolutely, and it’s something we’re hoping to integrate in our service within the next four to six weeks. With the aim to cut down the use of plastic (being difficult to avoid using it altogether immediately) we plan to introduce tiffin boxes and hot cases as our preferred packaging. With the payment of a one-time security deposit, repeat customers can opt in for this system. That way, each time we make a delivery, we simply collect the case. And the food will stay warmer! Talk about win-win.

Kusuma, embarking on a new venture at this stage is a rare feat only a few manage to achieve. How’s the experience been and what are your expectations from it?

I’m really enjoying it. Having always been a stay-at-home mom, it’s my first brush with business and though it can be exhausting on some days, not stopping anytime soon!

Given the response we’ve seen and how supportive everyone has been, I think there’s a very exciting journey up ahead. Going to be all kinds of firsts for this sixty-one year old! 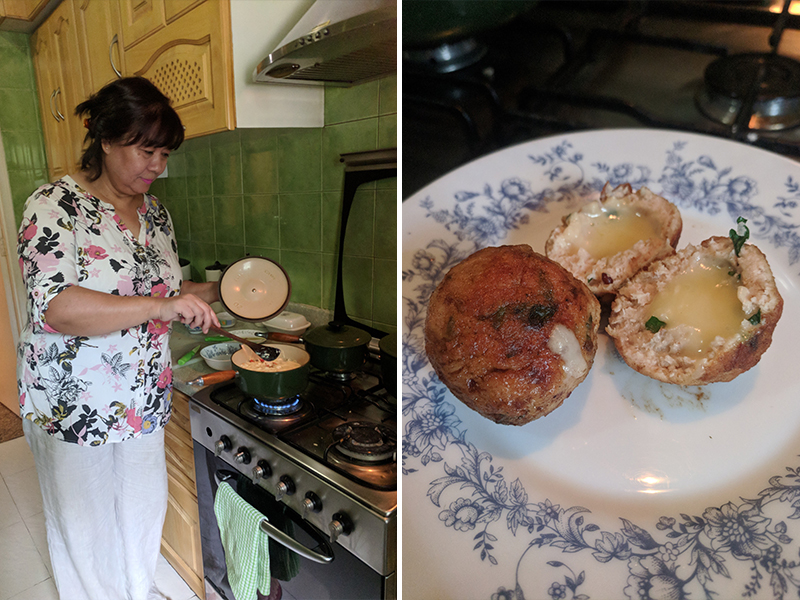 You have proven the adage ‘don’t mix business with family or friends’ wrong, how is it working together being a mother-daughter duo?

Kusuma: My daughter seems to have the temperament of a sixty year old too, which is great. We snap at each other, voices blaring, and then forget few minutes later.

Nicole: I think us working together has actually been an advantage. Because we know each other so well already, we know how to navigate through the high pressure situations, and the ‘debates’.

Kusuma: Plus nothing a gin & tonic can’t solve.

Nicole: It’s also been fantastic to see mom in her element, doing what she loves and now a small business owner. When it comes to work, we can both just go on for hours and hours. Like after our first meal service, we were so excited, and next thing you know, it was 6 am and we were still talking about it!

What new treats can be expect from Mood in the near future?

Kusuma: We do have some tasty new treats in mind, but being seasonal, we’ll need to wait until the winter months to include those in our service. Non-vegetarian dishes like Paah and Kargyong, which would go great with Tingmo. Will also be including vegetables like water chestnut in the stuffing for our vegetarian momos. Gives it a great crunch.

Nicole: Not big on vegetables myself, but she makes the meanest Broccoli Salad too. Will plan and feature other similar seasonal items in our meal services.

Kusuma: That aside, over the coming weeks, we do plan to introduce items like Chicken Momos, Pork Chops, Rice & Gundruk, which customers are yet to try.

They’ve also got expansion plans, including cooking workshops, tutorials, and a delivery system in the pipeline, otherwise Nicole’s in big trouble — Kusuma’s words, not ours! Gear up Delhi, Northeastern fare as you knew it is about to change.

Woody Allen: Decoding The Makings Of The Creative Genius