“We didn’t know each other, but music brought us together,” says Raghav Dang on how the three founding members of Reggae Rajahs, Zorawar Shukla, Mohammed Abood, and Dang, came together. It was late 2008 when a chance meeting of three reggae lovers from three different corners of the world set the wheels of reggae music in India churning. With February 2009 seeing the birth of Reggae Rajahs, it can be said without doubt that they have been instrumental in mapping the advent of reggae in India. From the early days of hosting reggae parties for friends to the current-day touring across the world, sharing the stage with the likes of Snoop Dogg and Major Lazer, founding a reggae festival, creating a bespoke sound system, and their own radio cast; the Rajahs certainly justify their crowns. With the reggae community establishing a stronghold, #DSSCSecretConversations caught up with musician Raghav Dang to trace the birth and coming of age of this movement he helped pioneer. 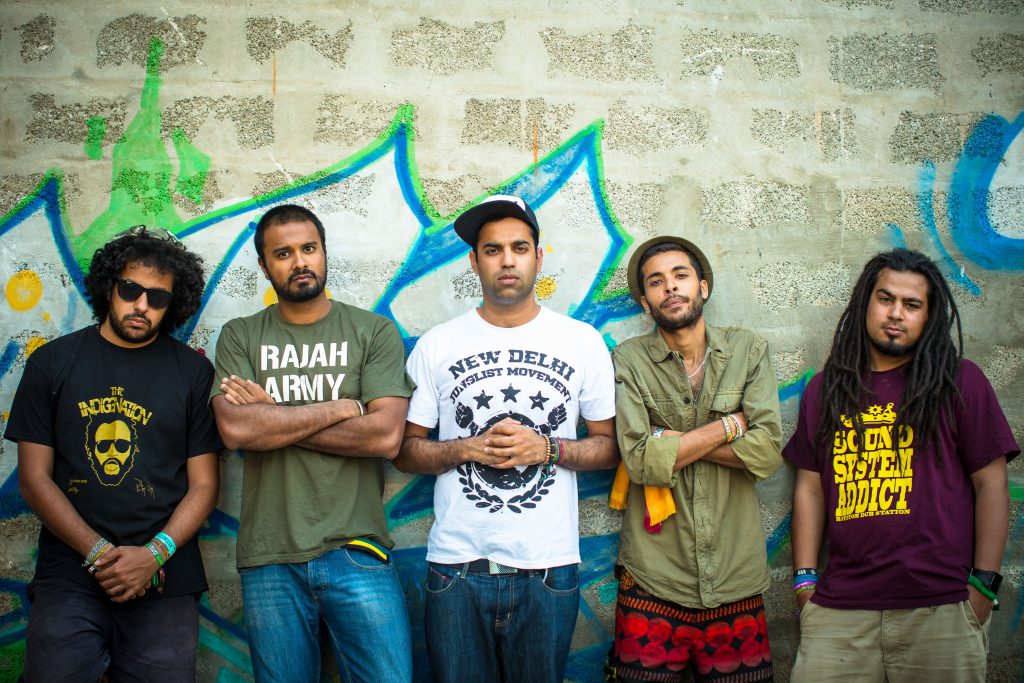 While Delhi’s first of its kind reggae party (in honour of Bob Marley’s birthday) brought Diggy Dang (Raghav), General Zooz (Zorawar), and DJ MoCity (Mohammed) together, music had been the subtext of Dang’s life for as long as he can remember. Spending his formative years in London, the city’s vibrant music scene seeped into Dang in no time, “From attending my first Michael Jackson concert at age 8 to owning a huge collection of vinyl records, I was surrounded by music growing up,” he shares. However, much like most 90s’ Indian kids, he never harboured the desire to become a professional musician as that didn’t seem to be a viable career option. Whilst on the trek up the all-consuming corporate ladder, Dang picked up the guitar; on one hand as the rut and pressure of the suit-up schedule mounted, the tempo of his music amped up on the other. Gradually he went on to become a regular on the London music circuit, and soon realised that the world of corporate wasn’t his oyster. One sabbatical and multiple epiphanies later, we cut to 2009 where  Reggae Rajahs was introducing India to nights of jerk chicken, rum ‘n’ coke, and Jamaican music.

This pack of DJs and MCs label themselves as entertainers and promoters of reggae, which was a tough nut to crack back in 2009, as Dang tells us, “Initially only expats would come to our parties, it’s only in the recent years that Indians started joining in. Also, the venues wouldn’t play reggae because it’s ‘too slow’ and they didn’t understand it well. It’s a struggle, but it’s slowly and surely growing.” Yet, there were select spaces, such as The Living Room (Hauz Khas) which welcomed new music and let folks like Reggae Rajahs become regulars. It was during these jam sessions that Raghav met Stefan Kaye and Nikhil Vasudevan, and within few months of Reggae Rajahs being formed the band Ska Vengers came to life. The precursor of reggae, ska music also originated in Jamaica; and with the Rajahs and Vengers in full force, the Indian music scene was ready to shake hands with music from the Caribbean.

As Reggae Rajahs progressed as an umbrella platform, furthering the growth of the reggae community through events, tours, festivals, et all, Ska Vengers gained popularity as a band, bringing in the live band element to the scene. Ska Vengers kicked off as being a collective of Delhi Sultanate, Begum X, Toni Guinard, Stefan, Nikhil, and Raghav. However in 2015, looming scheduling clashes prompted Dang to bow out of the band and be replaced by Chaz Bhalla, “Reggae Rajahs was actively touring outside of India and I was out of the country for half the year. At the same time Ska Vengers was getting gigs, which I unfortunately couldn’t be a part of. Since Reggae Rajahs does a lot more than just playing music, I chose them,” Dang says. As Raghav channeled all his energies towards Reggae Rajahs, two new members joined the group in 2013, Rahul Gairola (aka Ziggy B) and Bader Essafi (aka BeLights). With the sole mission to ‘propagate the reggae community’, the group adopted a defined strategy to divide & conquer,  DJ MoCity representing the crew in Dubai, Kuala Lumpur, and Istanbul; BeLights in Malta; and the remaining three in India. In 2013 they launched Pressure Drop, a radio cast that helped the group gain an international fanbase and get invited to play in places like like Brazil, Poland, Philippines. When asked about its genesis, Raghav says, “We wanted to show that reggae music is represented in India, and also step up our game in terms of exposure.” So when Raghav says, “The cast helped build a platform and changed our game in some ways,” one can only nod in agreement. A weekly feature, Pressure Drop plays on boxout.fm, an online radio station that cultivates alternative music culture in India, which was started by another rajah, DJ MoCity.

Taking their cause a notch higher, Reggae Rajahs ushered in the Sunsplash Festival in Goa in 2016. A reggae festival, it was conceptualised and curated by the group with the help of the existing reggae community in Goa, and has grown from a one day event to a two day festival in its short two years. Another feather in the rajahs’ cap is the 10,000 Lions Sound System, a hand-built sound system customised for reggae and related genres, it comprises of 12 speakers which work to enhance bass frequencies. “You feel the sonics of the sound, it’s like a musical massage,” says Raghav of this sound system. He adds, “The sound system culture started in Jamaica and went on to become a phenomenon across Europe, USA, Japan, and South America, and we wanted to introduce it to India.” It debuted at the Goa Sunsplash in 2016, and has since then toured the country, including playing at the Pune Supersonic festival. 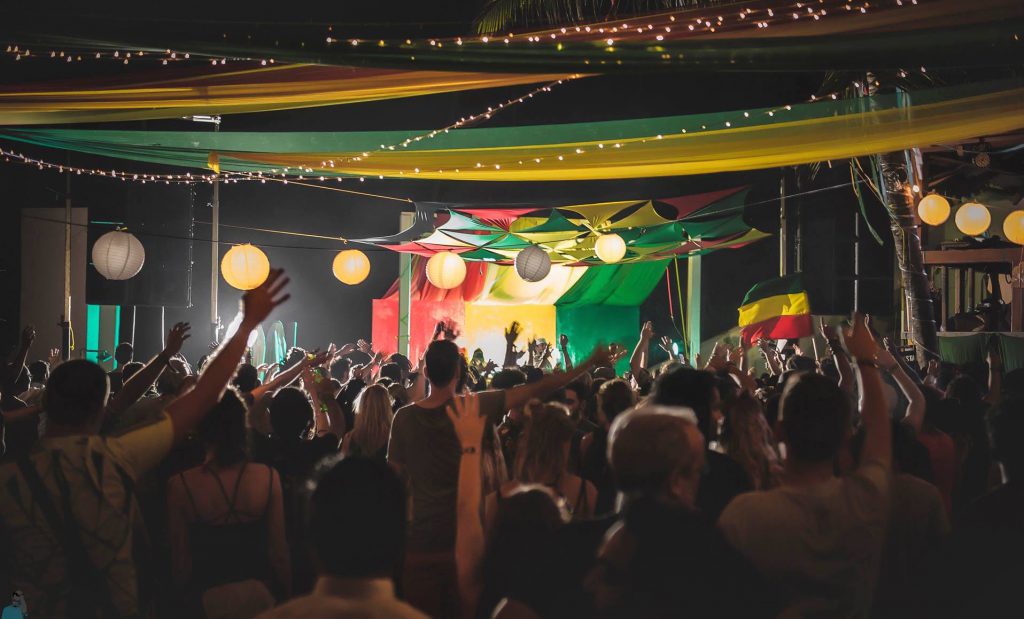 Having toured extensively across Europe, South America, and Southeast Asia, we ask Dang about the elements from the international scene that should take shape in India, according to him. “Three things – One, We’re majorly lacking in infrastructure to support our musicians. Two, We need more exposure to diverse genres. And third, We need to bring more international music acts to the country. We need to create a system where alternative music has a platform and people can attend performances to not just grab a drink but to get inspired,” he urges. In the industry for almost a decade, we dig into his perception of the evolution of music in India, “There’s been a huge change, from more performance venues to ease of sharing music with larger audiences through digital media. However, we’re still far behind when compared to other parts of the world. It boils down to the venues staying true to the cause and supplementing independent music, as that offers not only a platform but also encouragement to the musicians.”

On the note of creating a community that harbours ever-evolving avenues of music, we tune down our chat with Raghav, just in time to play our signature DSSC Rapid Fire for him.

One tip for budding musicians?

Get your music out there. Even if you’re not big in India, there could be somewhere else in the world where you could make it. If your music is good, you believe in it, and there’s passion in it, just keep at it.

Last song stuck in your head?

Your top 3 destinations across the world for their music scene?

One up & coming Indian band we should look out for?

I love that it’s still starting out, and as a musician you can do something different and really make an impact. That’s a gift and also a curse, because since it’s small there’s a glass ceiling to how far can you go.

One ritual as a Reggae Rajahs follows each time before performing?

We always grab a drink to bond before the act.

This conversation is a part of the DSSC Secret Conversation Series, where we get candid with the ace industry disruptors who map its course one masterstroke at a time.

Disclaimer: The opinions expressed in this feature are those of the interviewee and do not necessarily reflect those of DSSC & its affiliates.

Leo’s Pizzeria: Slicing Out A Storm In Delhi