Sharp interiors, a subtle-yet-striking grey and burnt orange theme, and zany music to serenade your evening. Shibuya Food & Bar, true to its name, transports you to the bustling lanes of Tokyo. Settled in to the comfortable seating and the sigh-inducing spacious tables, we wasted no time to peruse their distinct menu. The Zing Mojito, Hibiscus Lemonade, and Shibuya Southern Elle gracing our table, we sipped the well-blended mocktails and prepped for an onslaught of appetisers (which, in all fairness, we brought upon ourselves).

Starting off the evening was the Broccoli, Water Chestnut, and Cream Cheese Dumpling. The perfectly sized dumplings fit snugly in one bite, leading to an appreciative burst of cream cheese in the mouth with bits of water chestnut lending a nice crunch, ensuring that we weren’t left with a cream cheese-laden palate, and the dash of chilli oil packing a punch. While the flavour of broccoli went amiss, seconds of this dumpling are sure to feature on our table. The Spinach Wrapped Prawn Dumpling showed up next, the spinach still carried a considerable bite, as did the meat whilst being soft. It came on a tiny pool of black bean sauce, and while the sauce was impeccably made, the flavoursome dumpling was just as good without it too. Third dumpling on the roster was the Prawn Hargao, the skinless dumplings, while enticing to look at, didn’t quite match up to our flavour expectations, that had been raised high by now. However, the freshness of meat and skilled dumpling-making technique shone here as well. The last of the dumpling family for the evening, the Pork Gyoza, made an entry with a crisp wrapper and succulent pork filling. Mixed with herbs and spices, the ground pork was tasteful, and paired with the thin-yet-well done skin, it rang in major dumpling points. 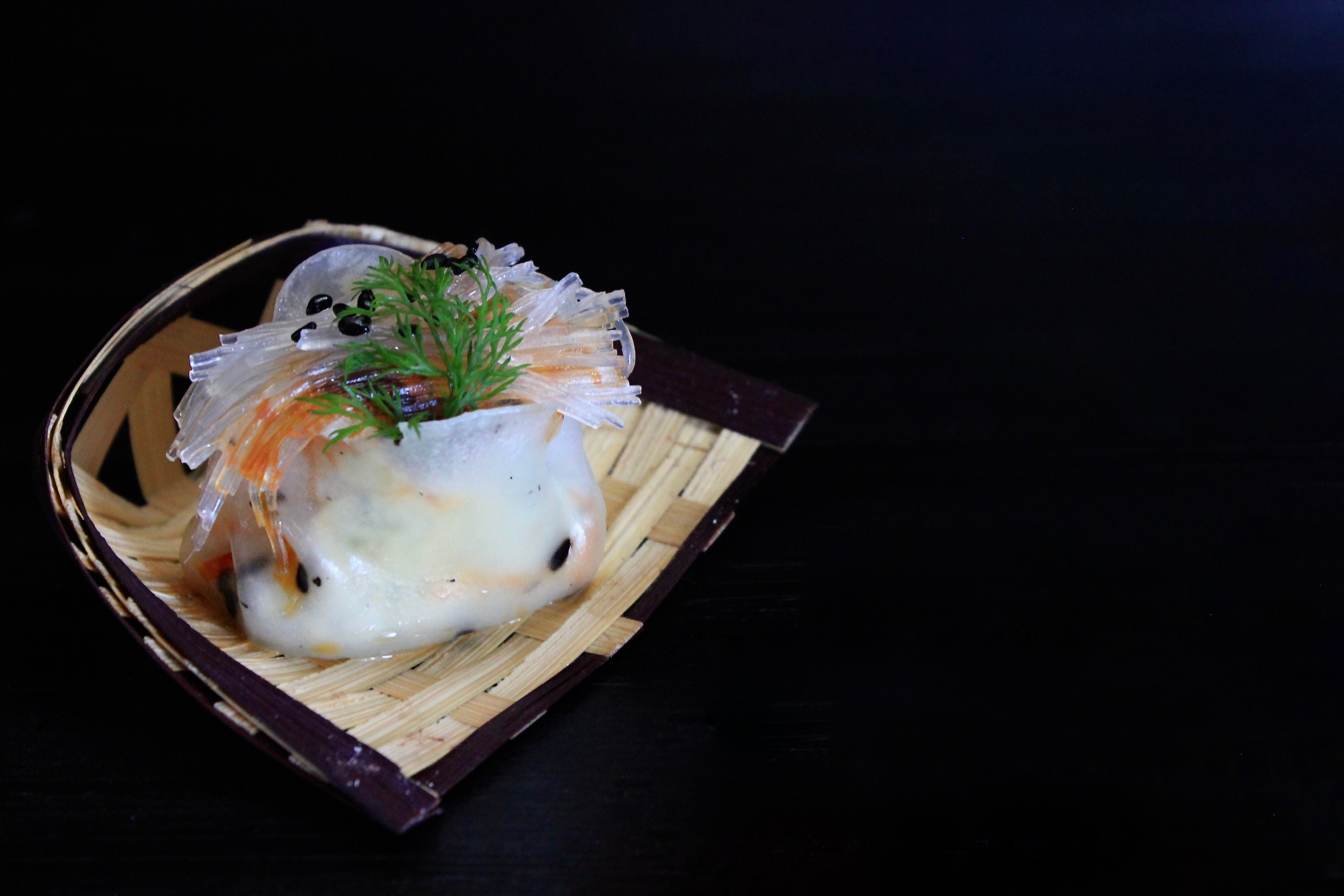 Up next was the Surf and Turf Roll – tuna sushi with yakitori sauce, pickled cucumber, and topped with glazed pork belly. The superbly rolled sushi boasted of a ‘make your eyes pop’ pork belly, with optimum glaze, and tuna flavours bursting through after the initial chomp. Creating an appetising melange of flavours, both the meats were balanced out nicely by the piquant yakitori sauce. Sushi numero dos was the Rock Shrimp Tempura Californian Roll. While the tempura was expertly fried, this roll left us wishing for more of an edge on the flavour profile. Before venturing on to the next set of dishes, we were generously offered a timeout by the chef, with the Thai Style Crab Stick and Shrimp Salad. A mix of herbs, snow peas, and cucumbers, this summer salad was refreshing, with the garden-fresh herbs carrying their crunch and the subtle sweet crab making it an slick medley on the palate. 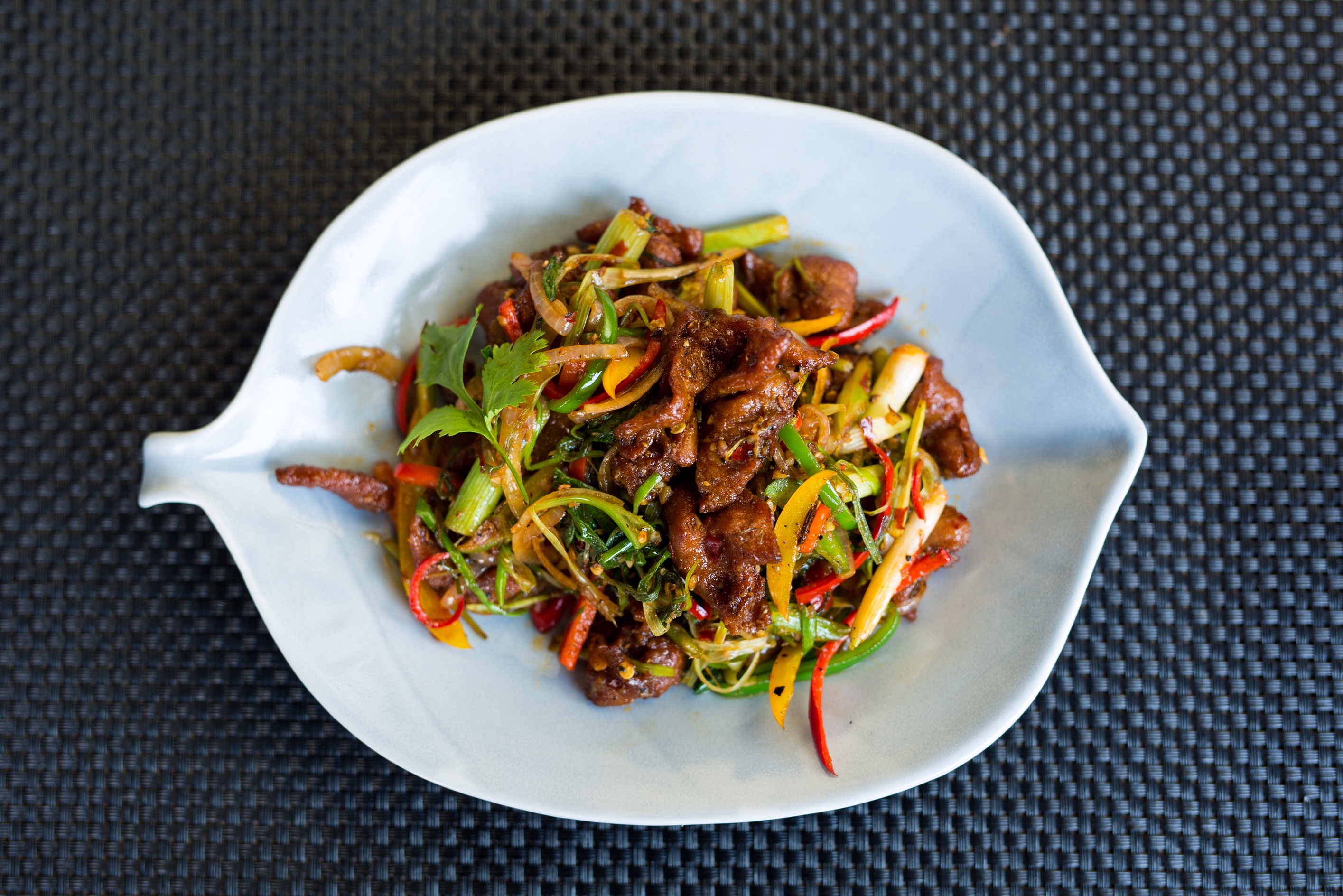 This was followed by the Vietnamese Style Chilli Caramel Chicken Wings. The meat is pulled to the side, eliminating any mess that may be incurred while chowing down wings. An appearance leaning more towards drumsticks than wings, it’s not just the presentation that was neat, the wings carried a skillfully done outer layer – crisp and crackling as you bite in, with the sweet caramel tang blending into the zing of chilli (creating a faultless balance), leading to soft and succulent chicken, which was seasoned to perfection. Hands down the best chicken wings we’ve had in years! Pulling us in its direction now was the Shrimp and Bacon Okonomiyaki. The savoury Japanese pancake carried a melange of crisp bacon, tender shrimp, crunchy cabbage bits with other veggies and was doused in Shibuya’s version of the popular bull dog sauce – ranking up as another favourite on their menu. The subtle taste of the ingredients was amped up greatly by the nicely done smoky, salty-sweet bacon bits. Lined up next for an appearance were the Shibuya Tuna Nachos, a toss of fried wonton wrappers, tuna chunks, avocado, and cucumber drizzled with spicy mayonnaise. Although this mash-up of ingredients didn’t leave as strong an imprint on our palates as the previous dishes, the wonton crisps turned nachos deserve a shout out.

Ushering in the concluding platters was the Xian Style Stir Fried Cumin Lamb. The masterfully done lamb was tender and luscious, and blended well with the promising notes of coriander and chilli – making it the sure-shot treat we were anticipating it to be. The other main course for the evening was the Spicy Sichuan Fish Hot Pot. Bean sprouts, Sichuan peppercorns, and chilli made for a rather relishable hot pot, with the taste being brought forth not just by the broth, but the fish too – and paired with fragrant jasmine rice to boot. 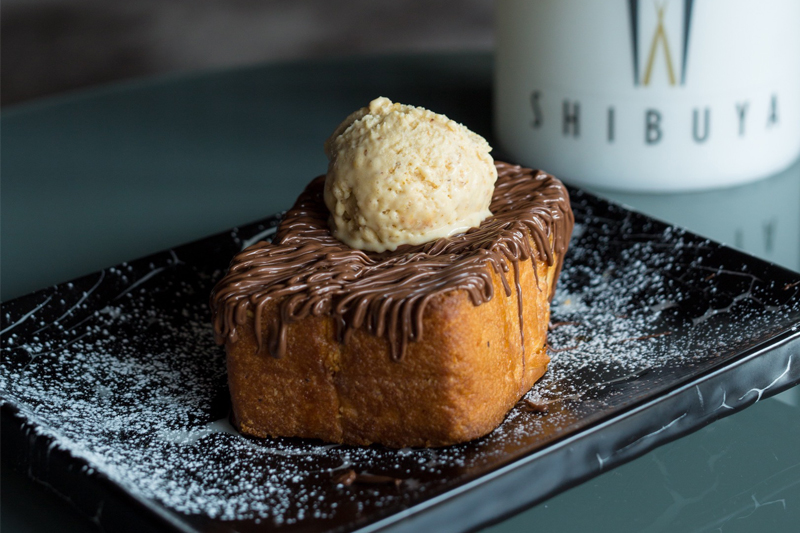 Drawing the supper to a close with the Shibuya Honey Toast, we couldn’t have asked for a better finale. The pull-apart, butter fried bread comes topped with Nutella and banana caramel ice cream – dense yet light to eat. The bread had been baked skilfully, and if butter-nutella-banana caramel don’t have you hooked already, you need a visit to the doc at the soonest!

A special mention for their ever-attentive service staff, the top-notch Consultant Chef, Hanisha Singh, and the passionate and invested owner and Food Stylist, Simi Kohli. Garnering a spot on our go-to list for Asian fare, Shibuya will have us returning sooner than you can pop that sushi (or even sooner, as the bar is now open).

Four Female Filmmakers Ready To Take Over Bollywood In 2018