Delving head first into her passion for food, flavours, and the culinary traditions of India, Sonal Ved’s bestseller Tiffin is an ambitious undertaking to document the regional cuisines of India. Ved, who is the food editor for Vogue India, embarks upon a familiar path, having previously written (2016), India’s first digital cookbook — a project that revamped the way we perceive vegetarian food. The recently launched Tiffin, is making waves in the culinary circles, and has been listed in the prestigious New York Times as one of the 19 best cookbooks for Fall 2018. It brings to the supper table, a gorgeous extravaganza of recipes, food traditions, and styles from the far-reaching corners of the subcontinent. With an insightful foreword by Chef Floyd Cardoz, complemented by stunning photographs by the talented Anshika Verma, the book is a treat you ought to indulge in. Over cups of coffee, we catch up with the affable and cuttingly insightful, Sonal Ved.

With five hundred recipes, Tiffin is an exhaustive and ambitious research project on the flavours of Indian cuisine. What drew you to this project?

My publishers are a creative bunch, who wanted to put together one of India’s finest recipe cookbooks, which is how the idea for the book was conceived. The brief in itself was overwhelming, but I wanted Tiffin to be different from anything that’s out there. If you browse through many Indian cookbooks, you will notice how the dialogue tilts towards the representation of popular Indian cuisines, compartmentalising them as North and South. Within these, only a few regions such as Punjab, Lucknow, parts of Kerala, and certain regions of Tamil Nadu are included. But what about hyper regional recipes such as the food from Bhatinda in Punjab, or curries from the Saraswat Goan community? What about cuisines from the desserts of Kutch, or the food cooked by the Memon community in Mumbai or Gujarat? Hence, I set about to collect hyper regional recipes to put together one of India’s most comprehensive recipe cookbooks. 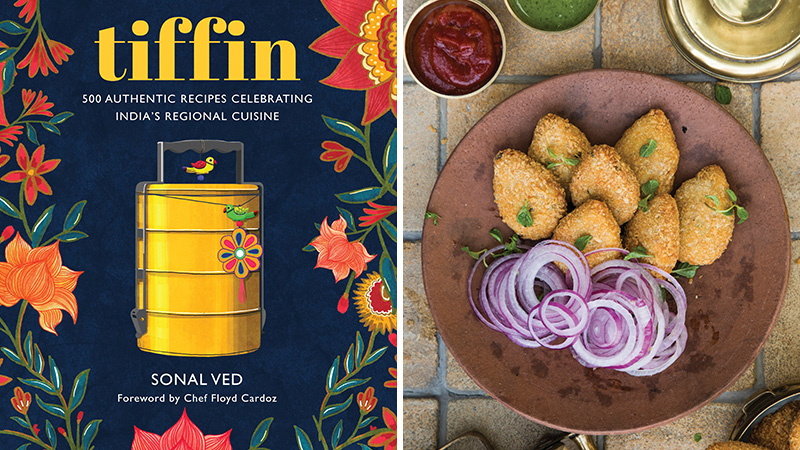 Whilst researching the book, were there any culinary findings that surprised you in an unexpected way?

One technique that stood out for me was the similarity in the way Indians boil various kinds of dough in bubbling water, and the way that resonates with the process of making Italian pasta. Dumplings for preparing delicacies such as  Gujarati dal dhokli, Rajasthani gatta, Amritsari vadi (made with lentil pastes), and Ladakhi skyus are poached in hot water until they’re al dente. I’m also fascinated with cooking food in leaves. For instance, banana leaves are used to make a Kerala-style fish and turmeric leaves are used in the making of  a South Indian dish called eradye — it was fascinating for me to make these discoveries.

The recipes you have documented go beyond the obvious and the popular. How tricky was this selection process?

There was only one prerequisite for the recipe selection process — they had to be authentically Indian. And not in the archaic sense. It could be a dish that was less than ten years old, but it had to be cooked in Indian homes — like a little known Sindhi dish called macronyul patata, which is potatoes and macaroni cooked like a sabzi or momos that made way into the hinterland only around the 1960s with the arrival of the Tibetan refugees. If the recipe is used in an average kitchen in a particular region, then it had to be in my book.

Were there any preconceived notions about certain cuisines that were shattered while you were researching for Tiffin?

I thought the food of the North Eastern states of India was predominantly non-vegetarian, but that wasn’t true at all! They use so many fresh greens, vegetables, grains, and herbs, in their dishes.

There is a growing trend of diners choosing regional cuisine over its global counterparts, the trickle effect of which can be seen in the publishing industry with more authors exploring regional food. Do you think of this as a new food movement geared towards momentum?

In today’s culinary landscape, it is temptingly easy to get swayed by global trends and adopt the use of charcoal and nutritional yeast in everything. It is because of chefs like Manish Mehrotra, Vineet Bhatia, Prateek Sadhu, Thomas Zacharias, and Floyd Cardoz, that we are once again giving Indian cuisine its due importance. I feel the next five years will witness a move towards sustainable ways of consuming Indian food, such as farm-to-table Indian restaurants which haven’t seen the light of the day, here. Ghee in Miami is a good example of the same, but that’s all there is.

If you had to pick just three of your favourite recipes from the book, which would they be?

I’m going to pick just one, my maharaj’s Undhiyu. I wrote the recipe perched on the kitchen shelf meticulously jotting down each step and measurement to make this Gujarati winter speciality.

Are there any recipes included in Tiffin that are a throwback to your childhood?

All the delicious Gujarati snacks — chorafali, handvo, panki, khaman — remind me of my childhood as I grew up eating them!

The book has a beautiful foreward by Chef Floyd Cardoz, one of the finest chefs of this generation. What draws you to his craft, his method, and his school of food?

Chef Cardoz is truly a champion of Indian cuisine. He loves it wholeheartedly and both his restaurants in India — The Bombay Canteen and O Pedro exemplify his food philosophy. They play with lesser known ingredients, cuisines, and flavours, making it nothing short of glamorous. He is doing the same thing with The Bombay Bread Bar in New York, where everything is done without tampering with core flavours.

The book recently garnered a mention in the coveted New York Times as one of ‘The 19 Best Cookbooks of Fall 2018’. What an honour for you and the team!

It was incredible to be recognized along with books like the Noma’s Guide to Fermentation and Ottolenghi’s Plenty. I’ve looked up to these chefs all my life. It (the NYT mention) has put Tiffin on an international platform as a book that represents our cuisine among other immigrant voices.

With cookbooks dominating nearly 40% of the publishing market, how does an author look to stand out in what could potentially be considered as a saturated landscape?

By thinking creatively and coming up with innovative ways to cover a subject. I think that’s most important irrespective of you being placed in a saturated landscape or not. Where’s the fun in doing that which is already done? Either we should take it a step up or do something different altogether. With Tiffin I wanted to take Indian cuisine a step up.

With our appetites suitably whetted, we cannot wait to try out some (or all) of the recipes from this fabulous cookbook. But before we say goodbye, we hold Sonal long enough for the signature DSSC Rapid Fire:

Who would be the ideal guest that you would want to cook for?

Yotam Ottolenghi, because I share his easy style of cooking.

Three chefs whose work you admire?

What dish do you turn to for comfort?

Your favourite restaurant in India and across the globe?

Suhring in Bangkok and The Table in Mumbai.

Any advice for a budding food writer?

Get your hands dirty. Visit markets, buy ingredients, clean muck off veggies, cook a lot, and read a lot.