With the first move came the amuse-bouche, Crispy Corn Curd Croquette with Tom Kha Soup. The croquette crust was done nicely, with a crunch-inducing bite leading to a soft corn curd center. While the corn wasn’t too prominent, the soup more than made up for the flavouring in the amuse-bouche. The delish coconut milk in the tom kha had us lusting for a full portion of the soup. The Sashimi Platter followed, with otoro (fatty tuna), big eye tuna, salmon, hamachi (yellowtail), and hotate (scallop). The freshness of the sea produce was evident with each bite, with the otoro and the hotate, both bursting with flavour, taking the cake. While the salmon wasn’t amped up on the taste meter, the hamachi and big eye tuna did well. 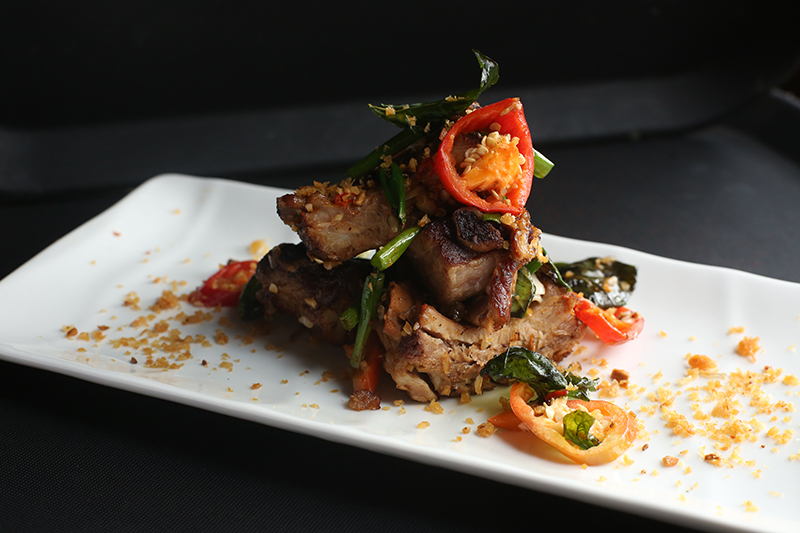 The Green Apple Tofu Roll appeared next, sandwiched between the best sweet chilli we’ve had and an impeccably done panko crust, this one was a triple treat. Although the green apple stuffing within the roll went amiss, the tofu was light and fresh, and the green apple reduction placed under it paired perfectly, creating a beautiful melange of flavours with each mouthful. Then came the Belgian Pork Spare Ribs Krapow. Expert Chef Rana’s claim that the pork was cooked for six hours was immediately confirmed; getting meat off the bone was an effortless task. These ribs were amongst the tenderest pork we’ve ever tasted. The combination of basil and chilli, flavours that had seeped into the meat, worked wonderfully. After the ribs, we tried the Five Spice Goat Brain and Cabbage Kimchee. The goat brain tempura was creamy and palatable, and was complemented well by the pungent kimchee. For those of you who relish the delicacy, this may just do the trick. 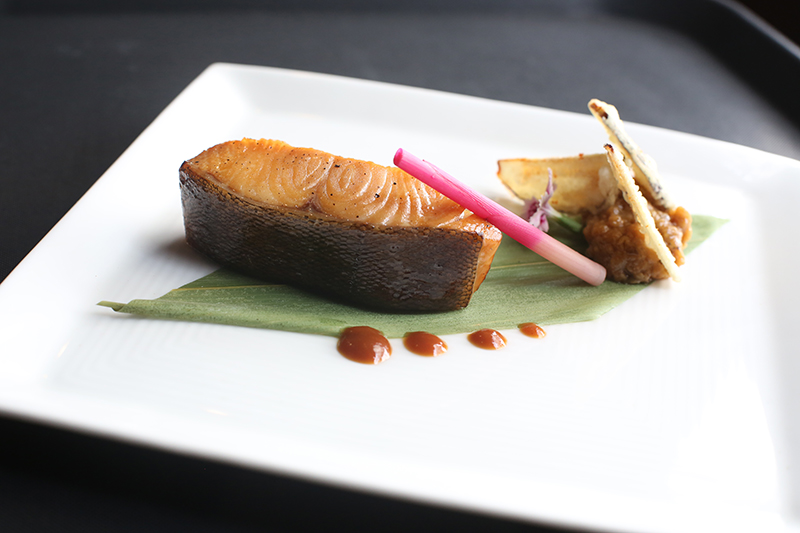 Crispy Chicken Wings beckoned next. ‘Explosive’ chillies and xinjiang spices made for one of the hottest wings in the capital. With a fried upper crust and superbly tender chicken to boot, the seasonings lent their flavour with each munch of this well-crafted dish. The wings are also possibly the best representation of Chef Rana’s penchant for using local ingredients to imitate authentic flavours. Here he uses the Indian spice timur instead of Szechuan peppers, while retaining the same flavour profile. Quality ingredients being the leitmotif of this menu, we moved on to the Miso Black Cod Smoked Eggplant. Once again, we had a winner wherein the miso glaze came through in the fish meat, not just as a seasoning on top. The eggplant puree and cracker on the side were nice touches, blending well with the cod — a must have for every eggplant fan!

Before we continued our exploration of the menu, the chef presented us with an off-the menu preparation, Fiddlehead Fern with Chopped Prawns. In season for less than a month, this Himalayan ingredient cannot be placed on the set menu. However, having gotten his his hands on some, Chef Rana was quick to incorporate it into his cooking and we were treated to yet another stellar dish. Resembling asparagus in texture and having a spring-like flavour, the ferns were great with the chopped prawns tossed in an assortment of herbs and spices. Next up was the King Prawns with Rice Congee. The king prawns and the regular prawns in their congee were prepared well, the congee’s texture hit the spot, and the coriander was a great garnish. With a touch less of pepper, this would have hit a home run. The Pork Belly was last on our devour scour before we made our way to dessert. While the pork wasn’t as tender as the krapow, it was done well and, paired with gailan greens and sambal sauce, was an exemplar of comfort food. 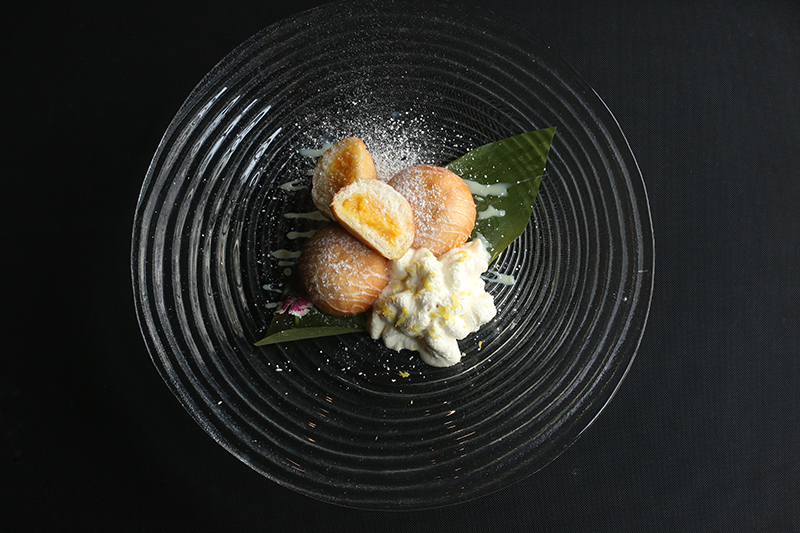 Bringing the splendid meal to a close were the Palm Jaggery Ice Cream and the Night Market Custard Bun. The ice cream was rich and creamy, with fresh coconut coming through, and the drizzle on top rung in major go-to dessert points. The custard bun came with the softest, lightest doughnut bun we’ve laid our hands on, a sumptuous sweet corn filling, yuzu cream on the side and a condensed milk drizzle. The yuzu cream helped balance out the sweet, and the condensed milk was a nice touch, all in all making it the dessert we couldn’t stop eating! If we had to pick one preparation you must try at Triple8, it would be the Night Market Custard Bun.

Before taking our leave, we got a sneak peek into their cocktails. Curated by the Barback Collective, the Gari & Gin Collin and Pandan & Jaggery Old Fashioned were potent, with each ingredient flavour showcased with finesse; and a promising trailer of the cocktail menu. With their liquor license in, the next on our list will be the wine collection put together by sommelier Magandeep Singh.

An affable staff and a playlist that’ll have you humming along through supper, Triple8 leaves no stone unturned to shower that Asian good luck on the #OurCity. Bookmark this delight for your next yum-in-the-tum pan-Asian indulgence.

Monkey 47: The Gin, The Story, And The Arrival In Delhi