Horror Films: The Return Of The Good Scare

The last decade or so has witnessed the emergence of smart horror that cleverly deploys the genre whilst going beyond its conventions. Paranormal Activity, The Conjuring, 1408, Black Swan — all belong to different subgenres of horror cinema and hit the screens after a sluggish phase spawned by reboots and remakes of classics of the 70s and 80s or of Japanese cinema (Friday, the 13th, Dawn of the Dead, The Grudge are notable examples) but also sparingly punctuated by gems such as 28 Days Later and the tongue-in-cheek Shaun of the Dead.

Earlier this year, critics at the Sundance Film Festival were left shaking in their boots with what is being called the scariest movie of the 2010s, debutant Ari Aster’s Hereditary. Its success behoves a pertinent question: what constitutes a good horror film? While there is no formula to make a film that can potentially manifest as a classic over the years, it is interesting to note that the recent spurt of intelligent horror films have one thing in common: a respect for the basics of filmmaking where theme and craft gain precedence over plot. Here, we look at some of the most outstanding films of the preceding decade and tease out what makes them tick.

‘Horror’, or rather ‘horror films’ usually bring the supernatural to mind. However, the word comes from the Latin horrore, which means ‘tremble, shudder; (of hair) stand on end’. By this definition, ‘horror’ can emerge from — and be applied to — various situations. Hence, the proliferation of various subgenres: action horror, comedy horror, supernatural horror, disaster/post-apocalyptic horror, body horror, found-footage, adventure horror, psychological horror, slasher, gothic horror, natural horror, sci-fi horror, and many more.

Sundance Film Festival, the champion of indie cinema, delivers one great film after another every year. In 2017, at a surprise screening, it gave the world Get Out, Jordan Peele’s Oscar-winning masterpiece that’s a horror film like none other. African-American Chris Washington spends a weekend at his white girlfriend’s parents’ mansion. The Armitage family is painfully liberal; in an attempt to make Chris feel included, they further alienate him by hammering in his blackness. That the servants on the estate are also invariably black does not help either. Chris, however, soon discovers what’s being conspired behind his back. The horror at the heart of Get Out is its bone-chilling examination of racial bigotry in 21st-century America. Chris is hypnotised and abducted so that the Armitage’s ageing friends and family can live on in a black person’s body. The film voiced the African-American nightmare wherein blackness exists for the sake of chromatic diversity, but the lived experience isn’t further from the title of Frantz Fanon’s book, Black Skin, White Masks. What makes Get Out truly terrifying — and path-breaking as horror films go — is the almost speculative fiction-esque exposition of systematic extermination of a community.

In the 90s, Wes Craven, the director of Nightmare on Elm Street, likened horror films to a “boot camp for the psyche”. He argued, “In real life, human beings are packaged in the flimsiest of packages, threatened by real and sometimes horrifying dangers […] But the narrative form puts these fears into a manageable series of events. It gives us a way of thinking rationally about our fears.” The threat of violence and the flimsy packaging are still very much intact in 2018, which is where the genre film steps in to provide a release for fear instead of creating it.

Besides race, another pressing theme that poses a threat of violence, and that horror films in the last few years have woven into their narrative, is sexuality. Three different films since 2014 have garnered critical acclaim for exploring this theme in different ways: The Witch, Raw, and It Follows.

David Robert Mitchell’s It Follows (2014) captures the terror of inescapable doom. After Jay, a college student has sex with her new boyfriend, Hugh, he briefly abducts her to tell her about ‘It’. ‘It’ is a relentless, slow-moving entity that may or may not take the shape of someone familiar to haunt a person and pose mortal threat. ‘It’ will follow them until they have sex with another person to pass on the curse. Crudely dubbed as a parable on STDs, It Follows is essentially a tale of existential dread wherein the fear that death can arrive at any point and in any form, looms large. What makes this supernatural horror film a great piece of cinema is the way Mitchell unsettles the viewer with certain cues. It’s an anachronistic film where cord telephones and CRT television sets from the 1980s coexist with what at first appears to be a flip phone, but is in fact a clamshell-shaped e-reader. The seasons in the film do not make sense either. For example, in one scene Jay is swimming in a backyard pool before getting ready for her date. At the date, every person in the frame is laden with thick woollen jackets. The final act of the film drives home the point about loss and death, but it also reaffirms that we are here for a finite period, and love and sex can perhaps push death away temporarily.

In 2015, Sundance delivered another horror hit that has since graced many ‘Best Horror Films of the 21st Century’ lists. More atmospheric than supernatural, the horror in The Witch by Roger Eggers is centred on human foibles. As Eggers stated in an interview with The Guardian, “For me, good horror is taking a look at what’s actually dark in humanity.” Set in the 1630s, a Puritanical family is banished from its New England plantation to live on the edge of a foreboding dark forest. The family’s newborn son goes missing, and we are shown very early on that it was a witch’s doing. However, the film isn’t fixated on the evil that resides in the woods. The filmmaker leaves it open to interpret whether the witch is a manifestation of the family’s psyche. Once the word ‘witch’ is uttered, a series of unfortunate events begins to take place and all fingers are pointed at Thomasin, the eldest daughter whose femininity is now blooming. 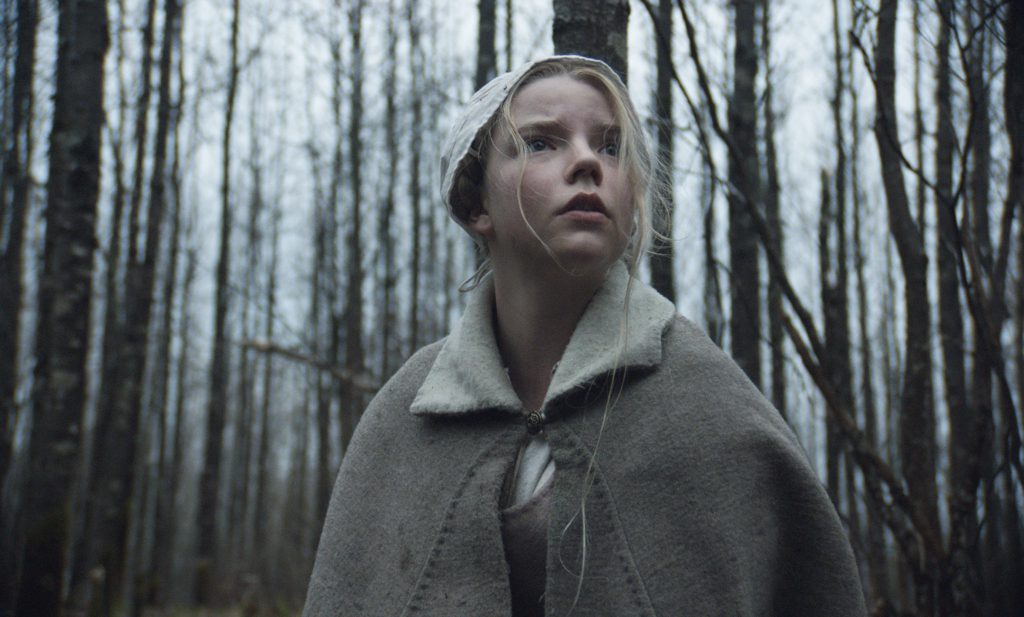 Eggers choice of setting the film in the 17th century is deliberate and essential to understand how, even today, a woman’s burgeoning sexuality is considered a source of misfortune, and should therefore be repressed. The Witch, with its ominous music score that was rendered brilliantly effective using instruments from the 17th century, builds an increasingly eerie atmosphere, without resorting to jump scares, as Thomasin becomes defiant and stands up to her deeply religious parents when they accuse her of witchcraft. The denouement, if spoiled, should ensure a place in eternal hellfire, but is a spectacular marriage of traditional witch lore and the benefit of modern hindsight. If we still take the Puritan nightmare of enjoying materialism and put the onus on women, have we progressed since the 17th century?

The director of the body horror film from France, Raw, Julia Ducournau, has a pertinent but oblique answer to the relevance of that question. In an interview with Rolling Stone, she explained, “When you make horror, it’s the expression of a form of violence that you feel inside of  you — and it’s important we recognize that women feel violence and anger as well.” When Raw was screened at 2016’s Toronto International Film Festival, two patrons fainted at the sight of its gore and violence. The film follows Justine, a strict vegetarian, who goes through ritualistic hazing at her veterinary college. She is forced to eat raw meat, which results in an allergic reaction, but her first taste of blood sparks a heretofore suppressed desire for the carnal.

Justine finds herself tempted by severed human fingers and the bare torso of her roommate, as she tries hard to control her cannibalistic urges. The film’s progression as a gore-fest is an allegory for Justine’s sexual coming-of-age, much to the chagrin of her vegetarian parents. Turning the promiscuous Maneater from Nelly Furtado’s 2006 number to a literal man-eater, Raw doubles down on what Get Out gently reminded its viewers of: that one can embed intelligent social commentary within explosive genre packages.

Yet another sub-genre that has turned out to be extremely profitable, and has roots in kaiju films such as Godzilla, is monster horror. The last two years have given us such taut films in the form of 10 Cloverfield Lane (2016) and A Quiet Place (2018). Dan Trachtenberg’s 10 Cloverfield Lane is the sequel to 2008’s found-footage monster horror, Cloverfield, but only in name. Here, a woman, Michelle, wakes up in a bunker after a car accident where she is told by two men that the world outside is uninhabitable due to a nuclear or chemical or alien attack. She hears car noises overhead, finds clues to her abductor’s questionable past, and relentlessly tries to get out. The film plays out like a psychological horror more than a monster movie because of the way it develops paranoia, keeping both Michelle and the audience on edge regarding the veracity of the men’s claims about what lurks overground. Shot almost entirely in confined environs, the film immerses its audience into Michelle’s sense of claustrophobia.

Karyn Kusama, the woman behind The Invitation and Jennifer’s Body once explained, “We often use the word horror in a semi-derogatory way, but asking the audience to engage in the question about what direction a character might take — that’s often times where horror resides.” 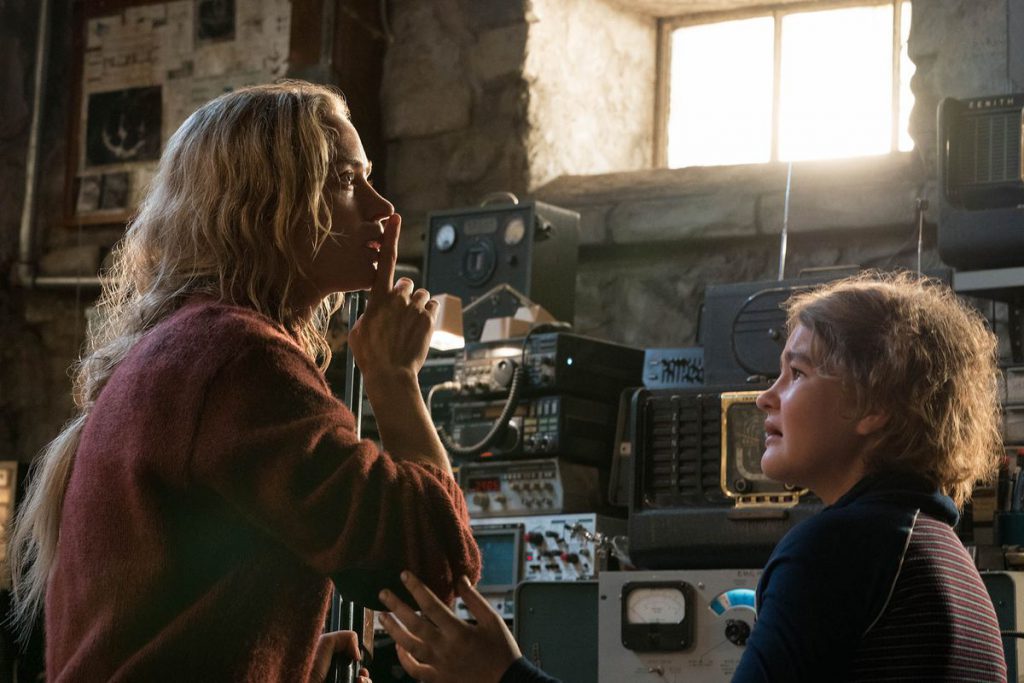 It is this audience engagement that makes both 10 Cloverfield Lane and A Quiet Place so forceful. The latter, starring Emily Blunt and John Krasinski, who has also directed the film, throbs with a deafening silence. The Abbott family lives in an indeterminate part of the US where the land is stalked by giant predators who have hypersensitive hearing abilities. There are two young children and a third is on the way. The fear and sheer impossibility of going through a silent labour already establishes the biggest fear at the heart of its premise: what does it take to keep your family safe? With barely any background score, the film amplifies the lurking dread Krasinski builds. Themes of family and gender-defined roles are highlighted in stark relief. The daughter is supposed to stay home with her mother, while father and son go out beyond the woods, battling danger, to bring home fresh water and fish. All roles get reversed in the end, making this a work of ‘woke’ cinema.

The genre of horror cinema is being pushed into newer realms. Although it will continue to reacquaint us with our primal fear of ghosts (have you seen the trailer of The Nun yet?), smart horror is now asking and answering pertinent metaphysical questions. As long as cinema keeps reinventing itself, a few scares along the way shouldn’t matter.

Father’s Day: 10 Movies To Watch With Your Dad