Leo’s Pizzeria: Slicing Out A Storm In Delhi

Pizza is our one true love (We kid, it’s coffee. Okay no, it’s gin. Wait, back to pizza) and we’re on the continual lookout for the best pies in the capital city. Stepping away from the current thin-crust rage, Leo’s Pizzeria opened doors in December 2016 and has been slicing out a storm ever since. Making our way to this much-talked-about pizzeria nestled in Chattarpur, the puzzle started to slowly take shape. Momentarily switching focus from the aroma and soaking in the interiors of wooden benches, warm lighting, photo-wall dedicated to the eponymous dog (& pals) and a statement wood-fire oven; the pizzeria is cozy and inviting. As we prep ourselves to embark on this viaggio in Italia, we get talking to the gent behind it all, Amol Kumar.

“My love for pizza stems from my childhood days. I was lucky to visit Europe a few times and being a fussy eater (I still am, for the most part), pizza was my go-to. While I was too young to appreciate Europe for what it is, I fell in love with their beautiful pie,” shares Kumar, whilst shaping the dough for our order. As we discuss Delhi’s pizza-timeline from the early 90s-Nirulas-era to current day, our first order hits the table and one gigantic chomp later, we know we’re in pizza heaven. With all the exotic variations available in the city, if you can’t get a classic margherita right, you aren’t getting a spot on the #DSSCRecommends list. With a fluffy crust, homemade tomato sauce, fresh mozzarella, and generous garnish of basil: the first pie ranked an 8/10. With the crust being the hero of this act, Kumar mentions, “With just three ingredients in a margherita, it’s the hardest to get right. But at the same time, it allows for the dough to shine.” 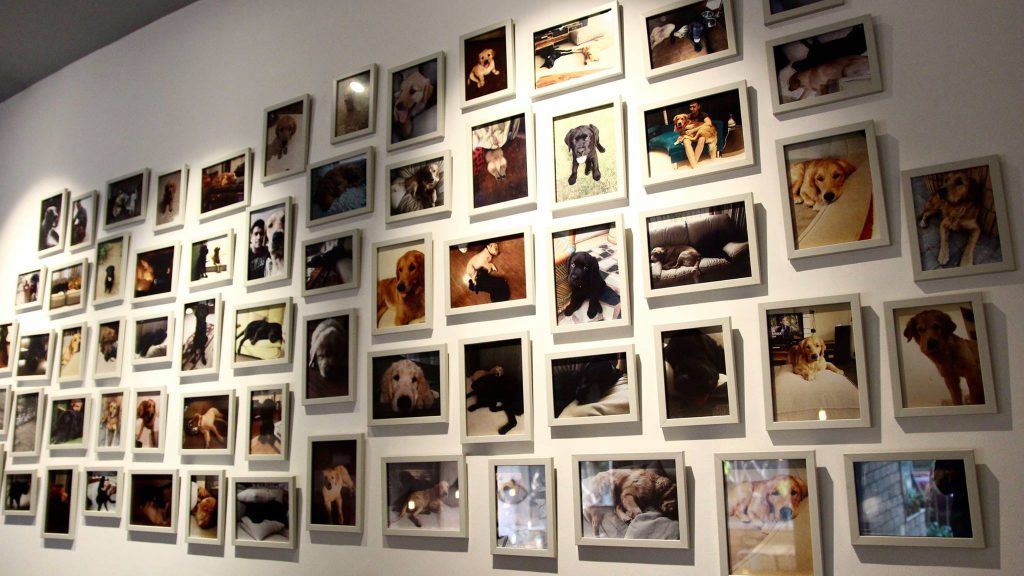 Whilst waiting for the next pie, we wander around the space that is replete with interesting nooks & corners – statement lamps, a personal collection of books, and the much-instagrammed wall of pictures of his dogs, Max & Leo. “I see my dogs everyday, in some sense, even though it’s on a wall,” Kumar explains the inspiration for the wall. Whilst the pizzeria was meant to be a namesake for both, Leo passed away during  the setup-stage. Asking if the pizzeria is Kumar’s ode to him, he shares, “It’s a little clichéd, but I feel he lives on through this place and it’s his vibe and energy that resonates at the pizzeria.” His dogs & pizza are the gent’s two true passions and he beams with pride to explain, “I’m grateful to be able to share his story with the world.”

Even though his initial education was in the industry he currently calls home, he didn’t think food would be his eventual calling, “I studied hospitality in Switzerland and went on to intern at Mövenpick, Geneva; however, my mentors were harsh and that experience incorrectly led me to believe that the kitchen wasn’t where I belonged.” We beg to differ, for the Four Cheese Pizza is one of the most smashing pies available in #OurCity (a record was set where this pie was devoured in under 4 minutes). The potentially-conflicting cheeses balance harmoniously with the freshly made sauce to create a flavourful explosion with every mouthful. Chuckling about our gobble-speed, Kumar shares, “It was a fluke! I had a few cheeses left from an event the day before and one of our regulars asked me to create a four cheese. I wasn’t sure how it would taste but he couldn’t stop raving about it. We put it on the specials menu and have gotten a spectacular response ever since.”

Post his stint in Geneva, coupled with a physical injury, Kumar joined his father’s business of garment manufacturing. Uninspired and the cooking-itch getting stronger, he wandered back to the space he finds most calming – the kitchen. Tracing back to his childhood comfort-food, he jetted off to Italy to learn how to make pizza at the Italian Culinary Institute for Foreigners. “We were making pizza from day one! After the three-week course, I went on to intern at a small family owned restaurant in Lenco. The exposure helped me hold my own in a kitchen – learning how to prep, how much to prep, and how to deal with problems that arise when running a restaurant,” shares Kumar in this DSSC exclusive. And prep he can, for the Goan Sausage & Fresh Onion Pizza showcases a hit combination of ingredients. He sources the mildly smoked sausages from Mumbai and adds another depth of flavour to the existing winning duo of crust and sauce. 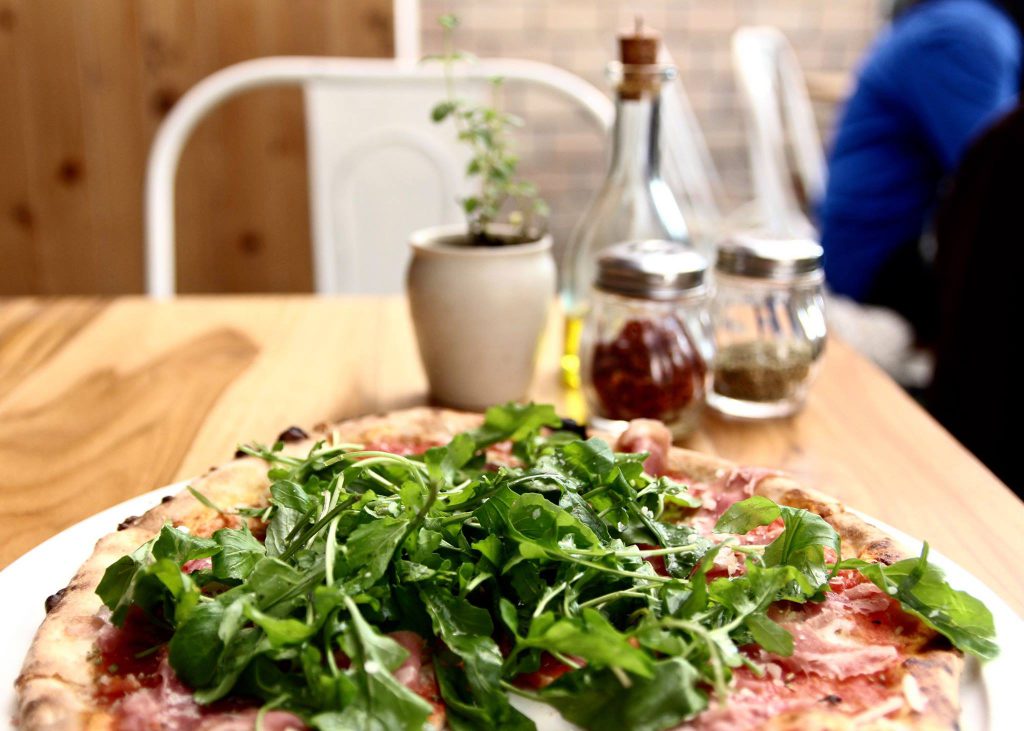 Back on home turf, Kumar was keen to showcase the authentic glory of pizza and not tweak it for Indian palates, in any way whatsoever. Challenging the thin-crust aficionados, he set up a small oven and set out to source the best Indian produce available, “I wanted to use quality produce but not source them from abroad and price it above the Rs.1,000 mark,” he shares. With variables like weather and temperature, getting the dough right is never an easy feat. Post multiple ingredient tests, permutations, and tastings with the feedback-friendly F&F, he’s now figured out his equation of ingredients needed for that magic crust. Acknowledging the complexity of getting the dough right, he invests every morning in making a fresh batch. While the quality is showcased in most pies, the Pepperoni Pizza failed to hit the spot (the meat was a tad bit salty that should have been offset by a different cheese) and the Classic Vegetarian was brought down by the toppings (no good has ever came out of a commercial jar of olives).

It took Kumar six months from the drawing board to tweaking the final product to open doors, “I never imagined it would look like this. A dear friend, Harshyla Singh, took this on as a passion project. With adolescent words like ‘cosy’ and ‘laid-back’, I explained to her a basic feel I was looking for and she brought it to life.” As we reach the bottom of our freshly-squeezed orange juice, Kumar shares the good and bad of functioning in Delhi, “I have received an immensely overwhelming response! The word spread in an organic fashion and it exploded before I even realised. There were times when we were so houseful, that our regular customers would chip in and help with service!” We get chatting about the divided reviews online and he’s honest to observe, “It’s been a humbling journey. However, you can’t please everyone and there are always those who are good to your face and then hide behind a screen name to trash your work.” 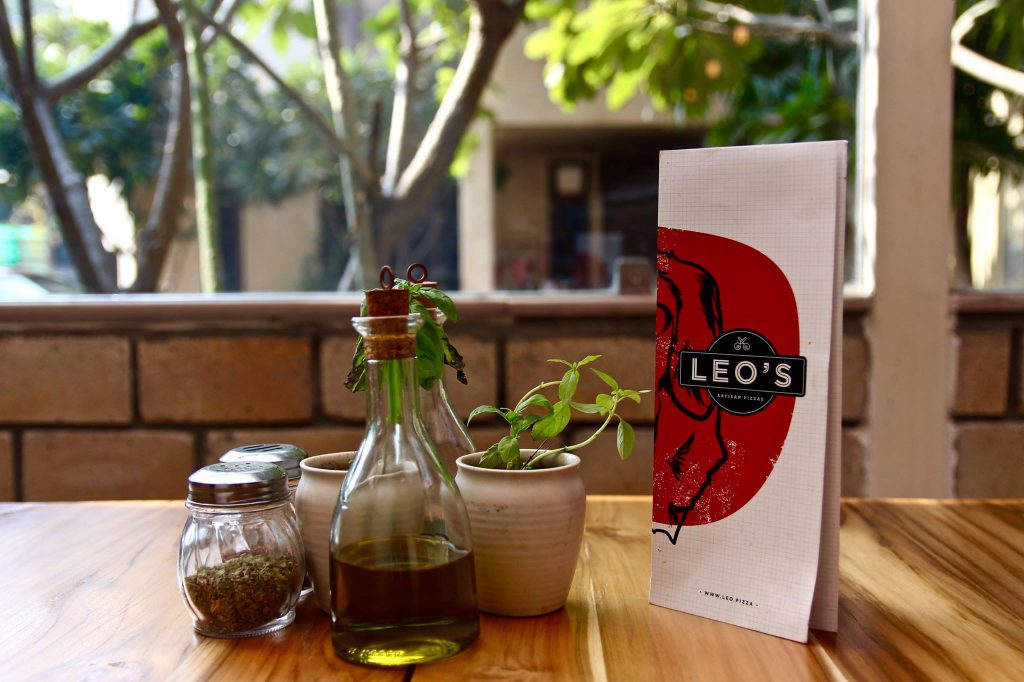 An inviting table at Leo’s Pizzeria

The pizzeria draws from his personal preferences, “I enjoy milkshake with my pizza, hence we have Cocio on the menu.” The team is looking to introduce new additions like Calzones and Siciliano, Romano, and Napoletana pizzas and a little bird also mentioned the potential addition of beers to the menu. However, it’s the Leo’s Produce Room that currently has him occupied, “You’ll be able to buy fresh herbs, spices, homemade jams, syrups, and other interesting things here,” shares the gent before bidding adieu.

Taking multiple pizzas for take-away (Pizza for breakfast, anyone?), we know we’ll be back for more. And if you’re making your way there this weekend, drop us a line on hello@dssc.co with feedback.