Oktoberfest is long gone but the launch of a Belgian craft beer is keeping spirits up. It took three ace brewmasters, a 100-year-old-sacred recipe handed down by five generations of passionate brewers, the finest of ingredients — wheat, barley, aromatic hops, Curaçao orange peels, coriander seeds (for a hint of spice), natural spring water, and time to create a refreshingly smooth brew which is now available in #OurCity in two variants. Say hello to Hopper Witbier, the Belgian style wheat beer and Hopper Blonde, the Belgian style lager that will grace our tipple tables this festive season.

The BMI Research of Business Monitor International indicated that the beer market in India is poised for strong growth in 2018. The report attributes the rapidly emerging demand for premium and craft beers to “the changing cultural attitudes and a young, increasingly affluent population.” While craft beers are having their India moment, we made way to taste Hopper at a stellar launch event hosted at the Belgium Embassy, and came back armed with a history lesson in beer. 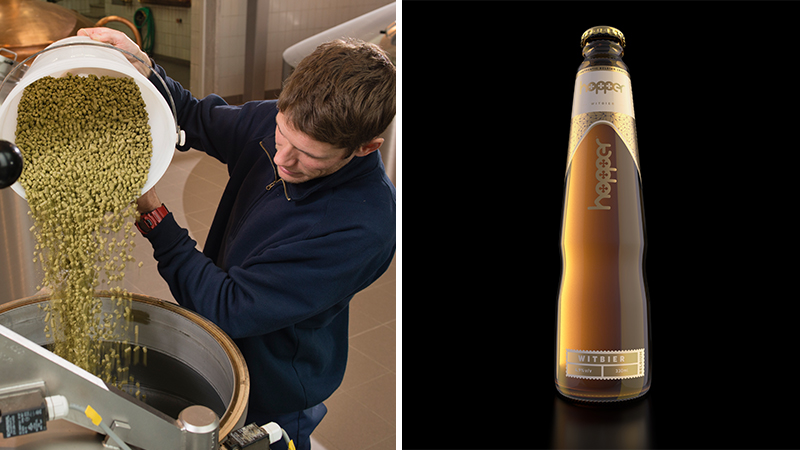 Hopper brings with it a 124-year-old brewing legacy. Crafted at the iconic Brouwerij De Barbandere in Belgium, the recipe for Hopper was rediscovered by three brewmasters — Chris Vanacker, Yves Benoit and Pieter Maes. Chris, the longest serving brewmaster at Brouwerij De Brabandere, feels, “our greatest freedom is the freedom to choose our brew.” De Brabandere, founded on a farm, may now be a sponsor of many classic cycle races including the Tour of Flanders (Ronde van Vlaanderen), but it has had its share of setbacks throughout its history. The brewery’s copper was requisitioned by German occupiers during the First World War and the brewery lorry, dismantled, on the eve of Second World War.

On the eve of the launch, Aman Dhall, Executive Director, Brindco who import, distribute, and retail the brew shared, “Hopper was created, seeking to integrate the best of both the worlds – Belgian brewing culture and modern-day craft. Hopper is more than a beer. It is a culture, a story about our passion and obsession to deliver the smoothest and most refreshing beer experience ever.”

The super smooth Hopper Witbier is delicious and smooth, and imparts a citrusy aroma. Spiced with coriander seeds and perfumed with Curaçao orange peels, the wheat beer bears a sunny light yellow colour. The lager, Hopper Blonde, made with 100% malt and the finest hops is pleasantly bitter, and leaves a smooth and rounded aftertaste. The bottle itself is unique and captivates us with its style and design. The negative space under the neck label is reminiscent of the arches it was inspired from, while the patterns on the label borrow from the ceilings in gothic architecture, and the intricate design of the crown tops it all befittingly. The golden hues of the bottle remind one of tranquil monastery culture of Belgium, and take you back to the distinctive history of the land of its birth.