Channeling our penchant for seeking culinary craft with a story, we made our way to Delhi’s latest sleeper hit, Orza. A view to reinvent the travellers’ taverns from the times of the Silk Route, the restaurant hits the mark with its interiors — ceramic and earthenware jars, sunlight pouring in through sheer blinds, and a clean and cosy ambience to the space. Comfortably settled in, we wasted no time and started exploring their Silk Route-influenced Indian fare that carries hints of an eclectic selection of cuisines such as Turkish, Persian, Kandahari, Kabuli, Kazakh, Uzbek, and Afghani, and more.

The Zeytoon Parvardeh was an ideal beginning to the meal. A mix of green olives, pomegranate, walnuts, and mint in vinaigrette served with lavash sticks, this simple dish was refreshing — ideal for a summer afternoon bite. Following this with their selection of kebabs we had the Beetroot and Yoghurt Kebab, pan-fried and crusted beetroot stuffed with cardamom and cilantro with creamy yoghurt. The beetroot was uniformly grated, perfect in texture; while it wasn’t sweet in and of itself, the accompanying elements on the plate — cherry tomatoes and sliced turnips — made the dish lean towards the sweeter side. The other vegetarian kebab on our table was the Paneer Kundan Kaliyan, batter-fried paneer served in a tomato and yoghurt gravy, with a side of Tamiri Roti. Bursting with flavours from an array of spices, the gravy was aromatic and played well on the palate, however, we would’ve preferred the paneer to carry the flavour on its own as well. Yet, the fried batter coating on the soft paneer was a combination that worked well, with the slight saltiness of the tamiri roti blending well with the gravy.

The final kebab of the day, Chapli Kebab, was a winner. The meat was coarse ground, just as it should be, and marinated expertly with bell peppers and a melange of spices. The spices heavily veil the taste of the chicken itself but don’t ruin it, making it one of our favourite chapli kebabs in the city. The last dish for the day was the Rista with Saffron Pita. Top-notch quality of ingredients used coming through yet again with the lamb, the marination of the rista was on point. The meatballs were easy to break apart, and the meat was as succulent as it could be. Hitting all the right notes, the flavour of the meat was emphasised over the spices. If you’re a garlic aficionado, this preparation is sure to impress you; yet it manages to bring across the seasoning of aniseed (saunf) craftily. The saffron pita on the side added the appropriate sweet notes to balance out the salty taste of the rista. 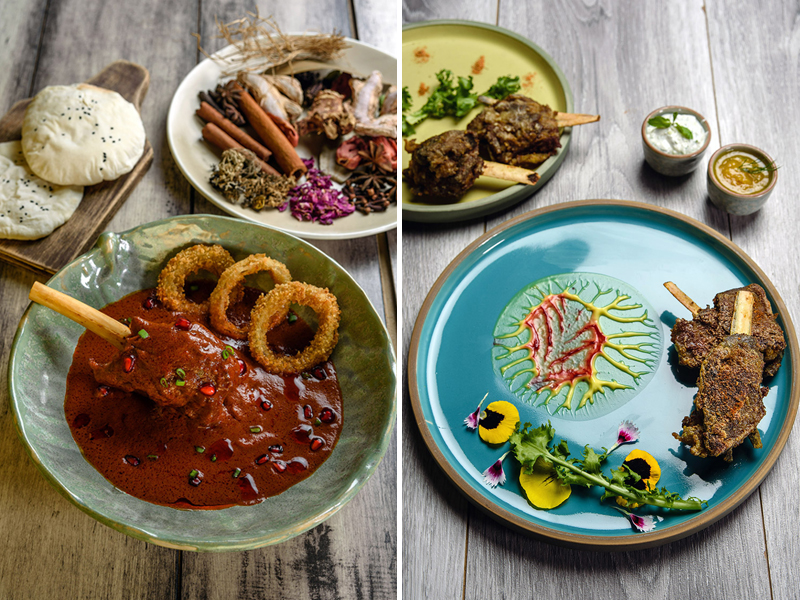 While the skilfully done fare will call us back for seconds sooner than we know, their cocktails and desserts are next on our to-devour list.

With Orza hitting the spot, we got talking with the gent behind it, Pawan Kochhar, to delve into its conceptualisation. It was his love for Indian food and the endless possibilities to experiment with the versatile flavours that this cuisine offers which steered him towards inculcating Central Asian influences into the fare. Speaking of bringing influenced Indian cuisine to the table, he sheds light on what they seek to offer, “Indulge in an eclectic selection of ingredients and pairings that infuse the familiar with the unexpected. Orza borrows from the epicurean offerings of Iran, Awadh, and Kashmir; the regions whose cuisine has greatly influenced Indian food. Just as Indians influenced the cuisine and adapted those, making it a part of their own food culture, Orza too has played with the flavours, resetting and redesigning the dishes to offer patrons something new and inspiring.” With the preparations living up to his word, Orza does an impeccable job of blending Indian and Central Asian palates. We ask how this task was achieved, along with crediting an enthralling experience of working with F&B Consultant Tarun Kumar Lal, Kochhar shares a four-step process that helps amalgamating dishes from different regions into the Indian cuisine:

This meticulousness shines through in the final product, and makes way for a promising cocktail menu. “All the drinks are hand-picked carefully to compliment the array of flavours we offer on our small plates. The Mumtaz Mirchi is one of our signatures and my favourite too,” signs off Kochhar. As we we pencil down the recommendation, we make sure to mark our calendars for visit número dos before bidding adieu.