Based on Harinder S. Sikka’s novel, Calling Sehmat, Raazi is a film about a 20-something Indian woman from Kashmir who spies on the Pakistani armed forces during the brink of the war of 1971. Hidayat Khan (Rajit Kapoor) works for the Research and Analysis Wing of India (RAW) and through his associations with Pakistan’s Brigadier Syed (Shishir Sharma), is able to pass on crucial information about the military developments to his handler Khalid Mir (Jaideep Ahlawat). Khan is, however, dying of lung cancer without accomplishing his mission to extract the requisite details that could alert India in the event of an all-out war. He passes his intelligence duties on to his daughter Sehmat (Alia Bhatt) who is to marry the Brigadier’s son Iqbal (Vicky Kaushal) and then spy on the family.

We first meet Sehmat as a bright but fragile girl in college with a photographic memory and a strong aversion to the sight of blood. She agrees to her father’s plan to infiltrate the Pakistani army through marriage out of a sense of loyalty, to not only him but, to the nation. She is raazi: in agreement and with secrets (raaz + i) to sacrifice herself, body and soul, in the name of the country. During her training with Mir, she is told to memorise code names for her in-laws: Eagle, Cat, Mouse, etc. while in all this charade, she is the scapegoat.

After her marriage and subsequent arrival from Kashmir to Rawalpindi, Sehmat is eager to please and win the heart of every family member. The family’s steadfast and loyal servant, Abdul, however, harbours misgivings, always looming in the shadows to keep an eye on her. Abdul, we discover, is a phenomenon of the partition of 1947 and has long turned his back on India. In the meantime, Sehmat continues to win favours and Iqbal’s heart, and pass on confidential information across the border by compromising her life. As she had learned during her training with RAW, as an adarsh bahu (ideal daughter-in-law) she maintains a smile on her face even when Abdul bores into her eyes with his suspicious gaze, and lets go of her mask when she is alone. It is during these moments that we see Sehmat as a vulnerable woman whose conscience is trying hard to be sehmat with her actions: when she commits her first act of betrayal, her first murder, and her first night with her husband when she literally sacrifices her body for the country. 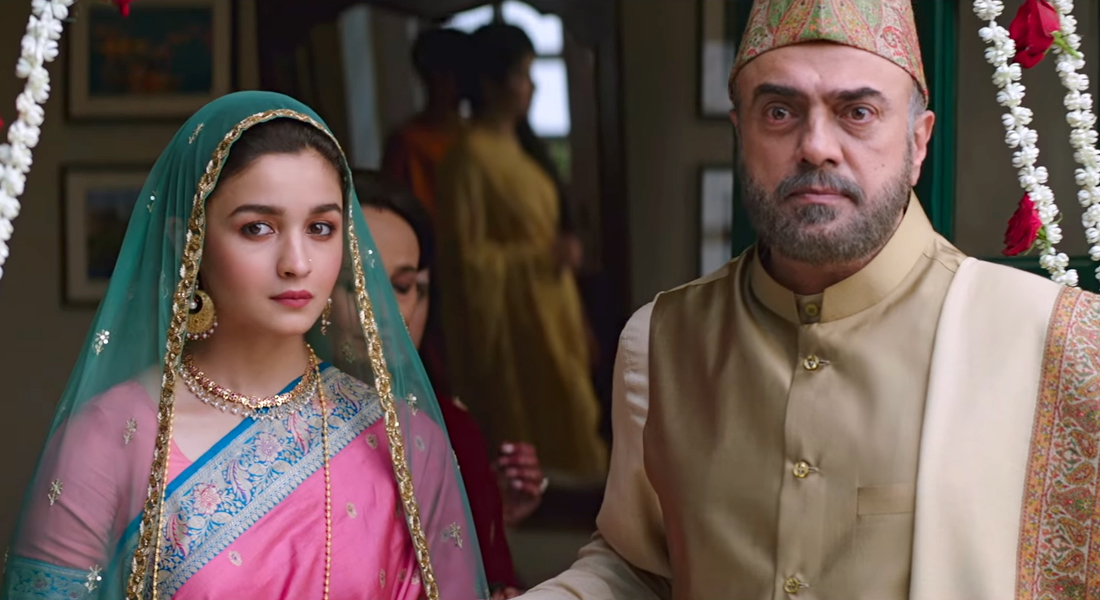 Certain incidents from the film stand out because of their very interesting handling of the question of jingoism. Sehmat helps the teachers of Rawalpindi’s Army School organise the Annual Day by picking 15 students for a recital. The song is “Ae Watan” which the children sing with a zeal to impress their families in the audience, whilst Sehmat, in the wings, mouths the words with tears in her eyes. It is a remarkable irony where an Indian woman teaches the children of Pakistan’s soldiers a song about patriotism. Another crucial moment is when Sehmat questions what she is becoming, with so much blood — innocent blood — on her hands, and all this for what?

Alia Bhatt is a force to reckon with as she glides with ease from a charming wife to a confident and agile spy to a vulnerable girl caught in a crossfire. Equally commendable is Jaideep Ahlawat as the hard-shelled RAW agent and Shishir Sharma as the Brigadier whose world falls apart when his family is targeted. Vicky Kaushal, as the quiet, jazz-loving husband, is convincing but it is only in the denouement that his character is allowed to flesh out. The film could have done without the drawn-out song about vidaai, Dilbaro. Although it seems to add to the dimension of the protagonist and her father as spies with a heart, it has the deleterious effect of slackening the pace of a film that is promoted as a thriller. The dialogues penned by Meghna Gulzar occasionally tread poetic territories. For instance, when Hidayat Khan makes a disclosure about his tumour, he says, “Cigarette-vigarette kabhi pi nahi, shayad zindagi ke kash kuch lambe le liye”. Translation is futile.

In these times of hyper-nationalism, Meghna Gulzar’s Raazi is a refreshing reminder that it is a subject that requires deep moral questioning, not necessarily clarity, as lives are always lost on both sides during war.