The Musical Journeys I’ve Undertaken Are Second To None: Dhruv Visvanath

Soulful, soothing, yet energizing, Dhruv Visvanath’s music is the kind you will end up listening to on loop. Fresh off the heels of his successful, and entirely crowdfunded, second album The Lost Cause, we caught up with the ever-so-versatile musician who is best known for his unique percussive guitar style and songwriting chops. He has been spotted donning his signature hat, “spanking” his guitar to mesmerized audiences at the Ziro Festival in Arunachal Pradesh, at indie music mecca NH7 Weekender, and most recently at SXSW in Austin. Self-taught, Visvanath’s distinct playing style earned him a spot in the US-based Acoustic Guitar magazine’s 30 Great Guitarists Under 30 list, next to musical greats like Newton Faulkner and Ed Sheeran. Travel is Dhruv’s biggest inspiration – he embarked on a country-wide tour in 2016 – an experience which led to the inception of some of his best work till date. DSSC catches up with the powerhouse musician to discuss his inspirations, music videos, the indie music industry, humanity, life, and everything in between.

What made you take up music, and subsequently make a career out of it? Was there a particular moment where you realised that this is what you want to do?

I’ve been playing music for a long time, but to have made a career out of it is something special entirely! The decision was sealed after I quit my first job and wasn’t able to pursue my Masters degree. I wanted to  get rid of my safety net and not look out for another job. I was going to make something of myself, for myself. That was in 2015, and I’m glad I stuck with it because the journeys I’ve undertaken and the stories I’ve experienced have been second to none.

You released Orion under Vishal Dadlani’s label. Why did you switch from releasing with a record label to releasing independently, especially after Orion’s success?

As a musician, you also end up being part entrepreneur. With lessons from the past, and the promise of amazing things to look forward to, I wanted to use this process to try and understand everything that goes into releasing an album, and for it to do better than my last album. It has been a struggle, but I’ve learnt many valuable lessons, especially on the recording and promoting front. Releasing independently, you learn a lot about trying to build an identity, and of course the music is your product. I also learnt the art of working towards making sure that the world listens to my music.

The coveted Acoustic Guitar Magazine listed you as one of the ’30 Great Guitarists under 30′ in 2014 with the likes of Ed Sheeran and Newton Faulkner. How do you feel about this recognition?

It has been four years since I was placed on the list, but it still feels like yesterday when I saw my name there. It was definitely a milestone, but I feel like it was also a stepping stone to larger things; and I’ve always looked at it in that way. Achievements like this come and go, but it’s important to always set a precedent to improve upon the past. Hopefully, one day I can earn myself a Grammy or a world tour.

What goes into the conceptualization of your music videos? Could you elaborate about ‘mop concept’ that was particularly fascinating in “Wild”?

I look at the process as highly collaborative. Having already spent a lot of time working on the album, and creating powerful stories through song, I needed another brain to create an amazing visual story to complement the song. That’s when I roped in Tanvi Gandhi to conceptualise and direct the video as well. The whole process involved exciting ideation & iteration, until she had settled on the right one and the final product never looked better.

You undertook a multi-city journey to find yourself which resulted in The Lost Cause. Tell us more?

In 2016, I decided to tour 17 Indian cities in a span of  six weeks. I took my best friend, Christopher, with me and it resulted in creating some of the best music I’d ever made. I used the journey as an avenue to see places where my family grew up. I went to Vishakhapatnam to see where my great grandfather worked as the first Indian Port Chief of the city, and also to Duliajan in Assam, where my grandfather worked as the president of Oil India – each city I visited had a story and it became a vital story to tell. I used this journey to find myself through my family’s history.

What gave you the idea of crowdfunding The Lost Cause?

My manager and me discussed many ways of promoting the album and decided the best way to do so would be to crowdfund it. This would fetch enough promotion time for the album whilst people would have a chance to be a part of its creative process. It was a massive move and I hope to be able to do it again. It helps me to make music videos and simultaneously collaborate with some amazing musicians. 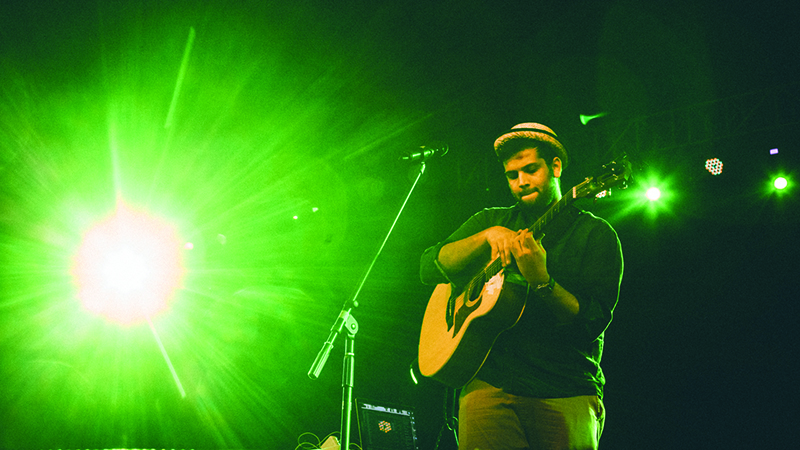 What is your take on the independent music scenario in India in 2018?

With the rise of streaming and distribution platforms, there has been an explosion of artists getting their music out there. We’re increasingly seeing a lot more discerning audience. We are no longer limited by the boundaries of our country and are witnessing the acceptance of our music across the globe. I feel lucky to have seen my music being played in North America and even Latin America.

A lot of work is being done right now to build the infrastructure, thereby a greater incentive to create music. There also exists a certain ease when it comes to publishing the music, and greater access than before. What needs work is the live environment. As artists, we still face trouble finding suitable venues in cities. There are a few places where a few changemakers persist and attempt to make changes, but these things take time. One can only hope that people learn to love watching music as much as they love listening to it.

Who or what has the biggest influence in shaping your music?

My mother and my brother influence my music the most, simply because they are all I’ve got. They would buy tickets, even if I wanted them there as my guests. It’s only the three of us in the family now, and we’ve had to learn that it’s up to us to ensure our success – that we work hard for each other and that one person’s success in this family is everyone’s success. And that’s why I feel it incredibly important to tell these stories; to speak of the other side of humanity. Not to speak of romance – but for the things we grieve for. For the things that make us happy, for the stories people will tell of us when we die, and for the characters we exist as today, while we’re alive.

With that, we attempt to pick at Dhruv’s brains to see what makes him tick, with our signature Rapid Fire:

Your favourite song off The Lost Cause?

Your favourite city to play in?

It’ll be a toss-up between Hyderabad, Kolkata, and Delhi.

Do you have any pre-performance rituals?

I talk a lot! But I never leave the venue, almost never.

An artist you want to collaborate with?

Describe yourself in three words.

This conversation is a part of the DSSC Secret Conversation Series, where we get candid with the ace industry disruptors who map its course one masterstroke at a time.

Annette Philip has donned many hats over her lifetime, all musical of...